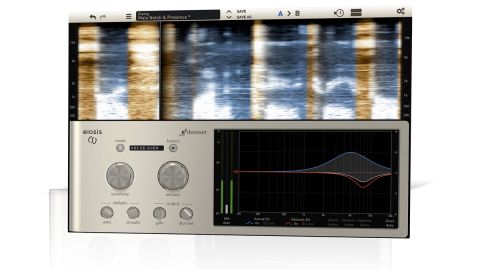 Hardcore audio nerds might bemoan its lack of deep control, but for those more interested in transparency, workflow and results, e2deesser is a gift from the gods.

Eiosis' original e2deesser, released in 2008, has consistently maintained its position as one of the most powerful de-essers on the market, so while the release of an updated version (VST/AU/AAX) doesn't come as a shock, it's mildly surprising it's taken the revered French developer so long to do it.

The new e2deesser (the name remains the same - this is another 'reboot', rather than a 'v2', like AirEQ last year) improves on its predecessor in just about every area, but still adheres to the same basic operational principle: the incoming signal is routed to a 'Voiced' path until sibilance is detected, whereupon the routing instantly switches to a separate 'Sibilants' path for processing, then back.

The total independence of these two paths becomes apparent when either is soloed in the Monitoring section, completely silencing the other.

For instant and near-effortless de-essing, all you need do is load a preset from the extensive library, and adjust the Sensitivity and Amount controls. Sensitivity sets the sibilance detection threshold and visualises its action via an animated collar; Amount determines the depth of processing applied to the Sibilants path by the Auto and Smooth parameters, and EQ.

In the Sibilants section, the Auto control dynamically adjusts the frequency response to target dodgy resonances, while the Smooth knob softens sibilance across the board by dialling in saturation. To the right of those, the Gain and Dry/Wet knobs simply set the output level and unprocessed/processed mix blend.

E2deesser's eight algorithms, selected in the Mode menu, configure a number of behind-the-scenes parameters to deal with a range of sibilance-reducing issues.

For de-essing singers, there are the Solo Vocals and Background Vocals Modes, the first detecting sibilance on the left and right channels equally, the second separating left/ right detection. Voice Over Mode uses a faster detection speed than the two Vocals algorithms, as befits dialogue de-essing.

Overheads Mode is intended for use on drum kits, doing away with harsh cymbals, and Guitar Squeaks targets detection and response to the string noises that guitarists are known to generate between notes.

Finally, the three Mastering algorithms (Stereo, M/S and Mid) are designed to curtail unwanted high frequencies in full mixes without dulling them, operating specifically on their named channel configurations - stereo, mid/side and the mid signal only.

The previous e2deesser featured a single band of EQ each on the Voice and Sibilants paths, and the new version not only blasts that up to four bands apiece but adds a graphical EQ display, showing the Voicing response curve in blue and the Sibilants curve in red.

Not only enabling fine tailoring of sibilance reduction across multiple frequency ranges (brought to bear by the Amount control), but also detailed equalisation of the main signal itself, the revamped EQ is a standout feature.

Also new, the spectrogram plots the amplitude-over-frequency of the recent signal (covering the host DAW's loop range, or the last 2, 5 or 10 seconds), with the Voiced and Sibilants paths shown in blue and brown respectively. 'Seeing' sibilance within a sound surely doesn't get any more immediate than that.

e2deesser's ability to accurately detect sibilance is uncanny, and the tools it gives you to deal with it are comprehensive. The presets and basic controls on their own will be enough to serve the needs of most, delivering natural sounding vocal de-essing and instrumental harshness reduction with minimal user input; but when you need more frequency-shaping control, the dual EQ is truly empowering.

It is, however, worth noting that no access is granted to the underlying processes at work behind the algorithms themselves, or the guts of the Auto and Smooth functions. That's not to say you'll ever need it, and even without an 'expert' mode, the second generation of Eiosis' amazing device might just be the best de-esser ever made.