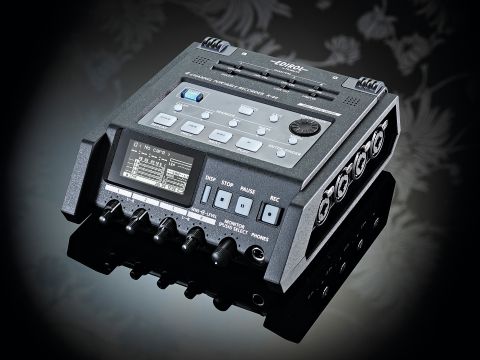 A well featured portable recorder with quality mic preamps for those who want more than just stereo.

The R-44 is Edirol's 4-channel portable recording solution. It boasts a whopping 192kHz maximum sample rate, though only two channels are useable at this quality - you get 4-channel operation at 96kHz or below.

Thanks to support for standard SD (up to 4GB) and higher speed/capacity SDHC (up to 32GB) memory cards, there's no reason to ever be short of recording time.

The R-44 is a compact and weighty beast which feels robust enough to endure the rigours of location recording. The inputs and outputs are recessed into the sides of the unit keeping them 'snag-free'.

The main controls are located on the top and at the front with backlit rubber buttons for most functions. There's also a wheel encoder for value adjustment and the audio scrub function.

The screen is not a large affair, but all the necessary information is clearly displayed, and a few presses of the Disp button give you easy cycling between menu options, effects parameters and level settings. Though the controls are generally well thought out, the navigation takes some getting used to as the cursors are arranged in a row.

Though the unit comes with its own internal stereo microphone there are four XLR/TRS jack combo inputs for a combination of line and mic inputs, as well as an S/PDIF input. The four channels can be routed to a combination of the four RCA (unbalanced) line outputs, the headphone monitor output and the S/PDIF output.

Though the output levels are set via the display screen, the input levels are managed by four double-stacked knobs at the front. The stepped outer ring sets the main input sensitivity, while the non-stepped centre pot takes care of fine-tuning, allowing for very accurate gain balancing.

Mixing can be carried out to a degree, though a lack of panning does limit what you can do here. The effects on offer are a 3-band EQ (fixed high/ low and a parametric mid frequency), a 6-band graphic EQ, a compressor/limiter/de-esser, an enhancer and an M/S mixer. The EQs, though limited, are of a good standard, as is the compressor, though a lack of gain reduction metering makes it a purely 'by-ear' affair. The enhancer on the other hand sounds nasty.

The addition of an M/S matrix algorithm is a useful feature, so long as you plug the figure-8 and cardioid mics into the right channels.

The internal mic is not going to win any prizes for performance, but what do impress are the mic preamps, which are clean and possess plenty of gain. The fact that the phantom power is individually switchable per channel is a real bonus. The line inputs/outputs also possess a professional sound quality.

There are many 2-channel portable recorders on the market and their appeal is obvious, but the addition of two extra channels makes it harder to assess where the R-44 fits in. As there are no sequencing or overdubbing facilities, it doesn't function in the way that 4-tracks of yesteryear did. However, the four channels can be put to good use for surround sound field recording or recording two mics at two different levels to make the most of the dynamic range/digital resolution trade-off.

We can't quite make up our minds as to where this product would best be put to use. However, what's for certain is that it's a good quality, easy to use and well built device that answers the needs of those for whom two channels just isn't enough. The one caveat is that, when you factor in the price of buying high-capacity SDHC media, the R-44 starts to look rather expensive.