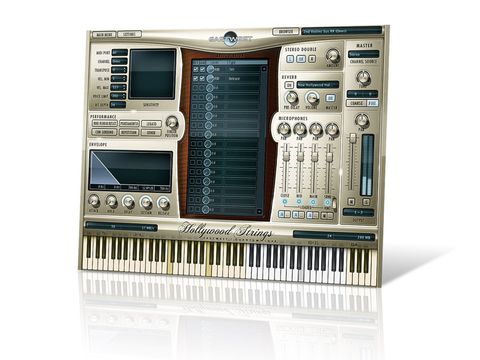 EastWest put in another star turn with this superb professional string library.

Recorded at EastWest's studios on Sunset Boulevard, Hollywood Strings is its latest instrument. It runs standalone or as a plug-in, with 312GB of sample content preinstalled on a hard drive.

Hollywood Strings ships on a bare internal hard drive, conveniently bypassing many hours of DVD copying. However, EastWest is quite keen to point out that this is really a transportation medium, and you should be copying this disk onto a fast drive (7200rpm minimum). It recommends in preference a solid-state drive (SSD).

It's also worth noting that the drive itself is only covered by a limited 30-day replacement warranty, although EastWest will always resupply the data itself should you lose it. Either way, you'd probably be wise to back up or transfer the data in some way.

Finally, you'll need to specify your platform (Mac or PC) so that EastWest can supply the correct type of drive. Having said all of the above, our Mac-specified review version arrived on a perfectly usable 500GB Western Digital Caviar Black - a premium (though maybe not server-class) performance drive.

Spread across almost 4000 articulation-specific and keyswitching patches for violin (first and second), viola, cello and bass sections, all typical styles are covered. These are complemented by script-based performance modes including legato, portamento and con sordino.

One interesting new feature is finger position. A number of violin, viola and cello long-bowed patches include control of string choice via finger position, so you can take advantage of the mellower bridge sound, for example.

Further articulations include bow change, up bow, down bow, played effects (tremolo and trill) and a number of prerecorded and playable runs in patch form.

However, one of the biggest features is actually quite subtle: sample crossfading. For vibrato and loudness (including the accompanying timbre), you can morph between playing intensities using MIDI CCs.

Given the potentially stressful CPU and RAM demands, it's a relief that some patches offer a 'lite' version too. As far as patch selection is concerned, the key to success is in learning their abbreviations (BC for 'bow change', for example). With such large sample sets to load, you'll want to pick the right one first time.

Onto the sound, and, unsurprisingly, it's excellent. Importantly, it's very consistent, but there are also real subtleties worth mentioning. For legato patches, velocity affects transition speed rather than volume, so playing harder means a quicker transition.

Next, some legato patches combine articulations and use a tempo-detection script to switch between them. With skill, further subtleties can be achieved using finger position (FP) patches and, in some instances, MIDI CCs (portamento speed).

Finally, it's worth saying that Hollywood Strings is purely section-based, so there are no solo instruments. However, EastWest have included full folders of 'divisi'-style patches captured concurrently using close mics to the left and right of each section. In practice, these can be useful for adding part clarity as well as producing traditional divisi (split) parts.

All told, Hollywood Strings is an incredibly impressive but demanding instrument, both in terms of system resources and your own mental faculties. However, if you produce soundtrack music professionally and/or seriously, you'll be used to that. This is highly recommended.

Violin section: A single melody line played using the bow change, slur and portamento patch from the legato powerful system folder. In the first example playing tempo affects use of bow change samples, and velocity affects use of slur or portamento.

Violin section: Using the same patch and performance this time we're using expression (CC#11) to control the loudness and timbre throughout, and mod wheel (CC#1) to control vibrato depth on held notes.

Cello divisi: Here we're playing a part on a round robin Cello divisi patch first left (A) then right (B) perspective.