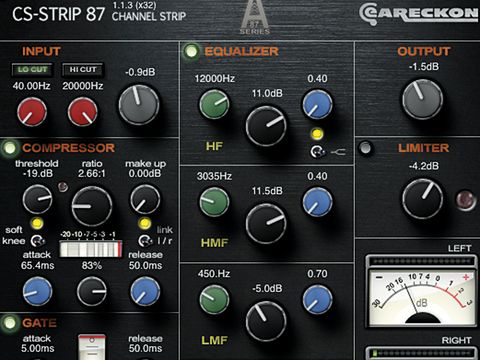 A bargain-priced quintet of dynamics and EQ plug-ins that operate beautifully and sound fantastic.

Last year, eaReckon really impressed us with EAReverb: its classy algorithmic reverb was sonically influenced by classic outboard gear, but it ultimately delivered a flavour all of its own.

The Analog87 series is similarly retro-influenced. It has just been rebuilt from the ground up, with new algorithms and interfaces, and the addition of Mac compatibility. The series comprises five plug-ins (available individually or as a bundle) covering typical mixing processors: compressor, gate, EQ and limiter. The fifth plug-in is a channel strip that combines aspects of the other four.

You can monitor the sidechain signal and even switch the meters to display it. If your host DAW supports external sidechain input, then you can connect that up, too, taking advantage of the aforementioned controls. Other useful inclusions are the Dry/Wet mix control and an additional output limiter.

SD-Gate 87 is a gate/ducker featuring the same sidechain circuit as the compressor. However, it's the gate threshold circuit that's special here, with its High and Low Threshold parameters complementing the typical envelope and Range settings.

These equate to 'open' and 'close' thresholds. Before we get into that, we should say that activating the Link option switches the plug-in to conventional gate mode. This sets the second threshold lower than the first by 2dB (like a fixed hysteresis setting), after which you can happily apply the standard envelope settings (Attack, Hold and Release).

For those times when such a standard set-up doesn't handle the tail of your sound in the way you'd like it to, you can unlink the two controls, setting a level-dependent closing threshold - as well as the opening one, of course - and thereby tailoring the gate's closing response to the input signal's dynamics.

So far, so good, but what happens if you then switch the gate into 'ducking' mode? The gate will then close (rather than open) when the signal exceeds the threshold.

However, with unlinked thresholds, you can then set the second threshold lower than the first, smoothing out the transition to open. This works particularly well if you're using the ducking mode to remove the initial transient from a percussive sound in order to isolate the tail end - but remember that the behaviour of the gate is also influenced by the envelope settings.

All but one of the Analog87 plug-ins have limiting sections built-in, but BW-Limit 87 is eaReckon's fully fledged limiter, boasting input drive up to +50dB, L/R linking, adjustable release and output ceiling controls.

It sets out to achieve brickwall behaviour without imparting too much distortion, even at fast release times. There's a rather useful Maximiser option that applies automatic makeup gain.

PR-Equa 87 is a 4-band parametric EQ with shelving available to bands 1 and 4, high- and low-pass filters (-12/24dB per octave) at either end and a limiter at the output. You get a visual representation of your settings and their effect on the signal via a real-time frequency analyser.

Finally, the CS-Strip 87 combines condensed versions of the other four plug-ins, arranging them in a mid-sized channel strip configuration. Although naturally more cramped, you still get useful metering for the gate and compressor, and even the compressor's Dry/Wet mix control.

eaReckon makes no secret of the fact that these effects are heavily influenced by classic analogue kit, although that influence isn't reflected so much in their sonic colouration as it is in their ergonomics/workflow and responsiveness.

The developers have done a great job with the interfaces throughout - they're efficient in use and easy to understand. We found SD-Comp 87 particularly well-designed and extremely responsive. The powerful built-in sidechain filters enable you to easily add snap to snare drums and punch to kicks, and with the onboard Dry/Wet control, parallel compression is a cinch to set up.

SD-Gate has a precision to it reminiscent of Drawmer's DS201, but factor in the threshold options and it becomes even more flexible than that classic box. Gates may not be as ubiquitous as they once were, but this one's a useful toolbox item, particularly when you factor in the built-in ducking option.

With up to +24dB gain on offer, the PR-Equa feels powerful and controlled, and the regular Q settings go very sharp, enabling high-precision boosts and cuts. The bell shape stays constant with gain, unlike some analogue EQs (not necessarily a bad thing).

Switch the outer bands to shelving mode and the Q setting can change the response from gentle slope to pretty extreme over/undershoot. Our only issue here is that you can't bypass individual EQ bands.

One of the challenges eaReckon set itself with BW-Limit was to be able to limit an electric piano, imparting minimal distortion when using a fast release. To our ears, it does an excellent job, even though the controls are basic. The 'maximise' option is useful when it comes to maintaining gain levels.

CS-Strip brings many of the elements together nicely, and although you lose the EQ visuals and the various sidechain options, pretty much everything else is onboard, including the main VU/peak meters. It's an excellent inclusion.

All five plug-ins successfully combine excellent ergonomics with great visual feedback, and we're hugely impressed by the sound quality. Unless your plug-in folder is already bulging with top-class wares, we don't doubt that you'll find good uses for them on a regular basis.

The bundle price is extremely attractive, and we have no hesitation in recommending each and every one of them to anyone in need of a set of gorgeous-sounding, easy-to-use analogue-style processors that won't come anywhere near to breaking the bank.

Finally, for a free taster, the Free87 series (using the same engines but with fewer options and basic interfaces) can be downloaded from the eaReckon website for nowt. Go get 'em!