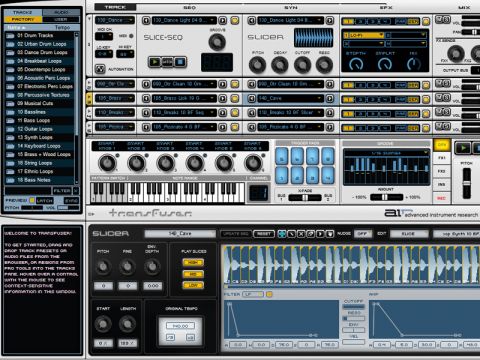 Transfuser might not offer anything particularly new or original, but thanks to Digidesign's clever design, it all adds up to much more than the sum of its parts.

Transfuser is an RTAS plug-in for Pro Tools that's intended to be a one-stop shop for loop creation and processing. To build up loops, audio files or track presets are dragged into the plug-in's Track pane, where they can be edited, tweaked and processed.

Tracks come in four varieties: Slicer, where sampled loops are played back slice by slice; Phrase, which enables a single sample to be played chromatically; Drum, where a selection of single-hit rhythm sounds are sequenced to create a beat; and Audio Input, which is used to process other Pro Tools tracks in real time.

Each track is made up of four parts: a sequencer, a sound source, an effects section and a mixer. The Slicer, Phrase and Drum Synth modules all have their own dedicated sequencer types, or alternatively, you can use Pro Tools' own MIDI sequencers to trigger a track via the Thru Seq module - this is very useful for more complex sequencing tasks.

Slicer tracks work in a manner similar to playing back REX files using a software sampler - each note on the sequencer plays back a slice of the loop, enabling you to rearrange and alter the timing of loops as necessary.

Each type of track has its own dedicated sequencer too, and the slice sequencer works much like Pro Tools' MIDI Grid Edit window. However, each note event is a fixed length and will always play back the whole of each slice.

You are given control over the decay of each event, though, as well as velocity, pitch, filter cutoff, pan and reverse settings.

The overall filter settings of the slice mode are controlled in the Slicer synth, where you can also tweak the filter and amplitude envelopes. Other facilities in this section include a length control that can be used to extend the duration of slices - useful if the loop is played back at a lower tempo than it was originally created at - and a graphical waveform editor, where slices can be added, repositioned and deleted at will.

Phrase tracks feature a sequencer that functions much like the Slicer's, although here, each event's length can be set by the user, and the available settings are velocity, filter, decay and pan. Phrase tracks are usually set to sample mode, where playing different notes on the keyboard affects the pitch and speed of playback.

Other modes include a variety of pitchshifting algorithms that maintain the sample's tempo; a lo-fi mode for gritty, granular playback; and Vocodize, which functions in a way similar to Kontakt's Tone Machine sampler mode, and is useful for creating artificial-sounding vocal effects.

Drum mode works much like your typical virtual beat creator. A total of 12 pads are available, each of which has its own track in the Drum Sequencer. Six of these tracks can be viewed at any one time, thanks to the sequencer's pleasantly large window, and if you want to beef up your hits, you can load and layer a second sample into each pad.

The step sequencer works in the traditional manner, but includes several niceties. Each drum trigger has its own velocity, time, pitch, filter, decay and pan settings, for example, and the unusual additional of a Simplify knob enables you to make the drum loop less complex - as this control's level is increased, more and more of the triggers are muted until you're left with just the backbone of the beat.

The effects modules are the same no matter what track type you're applying them to, and enable up to four effects to be applied to the track. These can be routed in serial or parallel modes, and include such delights as the LiveCut-style Beatcutter and 19 other, more typical options, like vinyl simulation, compression and reverb.

As well as separate controls for each track, Transfuser has a bank of master settings, including a global groove control for applying swing (although this can be overridden on individual tracks if desired), a couple of send effects chains and a master effects chain.

The master section also features six smart knobs, which can be assigned to multiple controls on a number of tracks, as well as drum pads and MIDI control settings.

Transfuser comes with a healthy 2GB of preset tracks, including live-sounding breakbeats, programmed drum loops, acoustic and electric instruments, live and programmed bass sounds, vocals, effects and so on.

The quality of the supplied tracks is great: the loops are all labelled with tempo and key, and the library provides plenty of useful material to help you get started.

It's also possible to drag audio files into Transfuser from your computer's hard drive, a Pro Tools track, or even the application's own output. These sounds can then be used with any of the available track types, and Transfuser will automatically and accurately chop up the loops you choose to work with in Slice mode.

Digidesign has clearly gone to considerable lengths to give Transfuser a great deal of flexibility and depth. This takes the program far beyond the realms of straightforward loop processing and into much more exciting areas.

Even if loop-based music production isn't normally your cup of tea, Transfuser is an instrument that you really must try.

Listen to Transfuser in action: