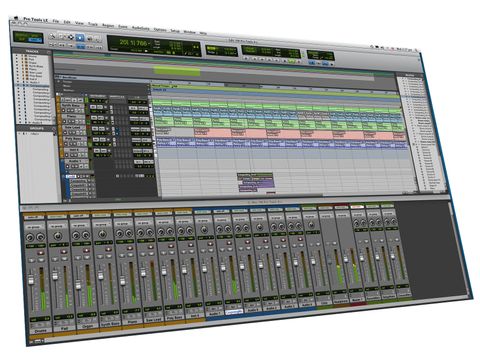 Existing users will still have a few gripes, but this update is the most musician-friendly version yet.

Pro Tools 8 is a cross-platform DAW that's available in three basic forms - M-Powered, LE and HD. Each version is designed to match specific hardware, and M-Powered and LE rely solely on your computer's CPU for processing.

Pro Tools has its own three specialist plug-in formats: RTAS, which use the computer's CPU for real-time processing; TDM, which are specific to HD systems using the on-card processing; and Audio Suite, which enable you to process audio files in non-real time.

This adds complexity and potentially expense, as TDM plug-ins cost more. Even so, you'll find that sessions transfer well between different versions and even between platforms. Compatibility is a big Pro Tools selling point, particularly if you plan to transfer work using an HD rig.

In Pro Tools 8 LE and M-Powered still have track count limits, but the audio track limit has been increased to 48 stereo (note, HD track limits depend on how many cards you have).

For some time now, Digidesign's Advanced Instrument Research (AIR) team has been turning out some impressive instruments (Strike, Structure, Hybrid and so on). Unfortunately, these have been and continue to be 'pay for' extras. However, Pro Tools 8 includes six completely new AIR instruments and an associated sample and loop library (8GBs worth).

Boom is the new beat box. Taking its lead from classic drum machines, you get ten kits, a 16-step sequencer and 16 patterns per kit. Next up, DB-33 is a single-manual tonewheel organ. Variable percussion, drawbar selection, tube preamp and rotary speaker emulation produce the traditional Hammond-style sound.

Still in 'classics' territory, Mini Grand provides seven different piano presets - soft, ballad, real and so on. With adjustable parameters including room, dynamic response, tuning scale, note polyphony and even an economy mode, quick and easy is the name of the game.

Making up the 20 is the simple StereoWidth effect. All plug-ins have the stylish simple graphics and offer the same kind of foundation you get from the stock plug-ins in applications like Logic and Cubase.

It's worth saying that version 8 also adds as standard a number of plug-ins that were pay-for extras, including Maxim, D-Fi, Bomb Factory Sans Amp and TL Utilities. You'll also find Digidesign Eleven Free within the installer, and the FXpansion BFD Lite acoustic drum instrument

So, add this lot to the existing plug-in pack and you have a serious package straight out of the box.

Pro Tools 8 has new MIDI and Score edit windows. This is important, harmonising PT's behaviour with pretty much every other DAW out there.

Looking at MIDI first, on the face of it very little has changed, and if you absolutely must, you can carry on working as before. However, a double-click on a MIDI region opens the MIDI Editor screen. Much like other piano roll editors, the keyboard is vertical to the left with a timeline along the top and data such as velocity in a lane below.

Being Pro Tools, notes and data follow the grid, slip, spot and shuffle modes. Rather usefully, modes are independently selectable within the MIDI Editor. Interestingly, the data lane at the bottom goes beyond just MIDI parameters, enabling you to draw in regular automation too - very neat.

Look to the left of the MIDI Editor and you'll see the tracks list. Here you select which MIDI parts appear in the screen, and also which one you want to edit. This means you can edit MIDI completely within this screen without returning to the Edit screen to select different tracks or blocks - again, very neat.

Finally, the MIDI Editor also has a notation display option which quickly switches the MIDI info to traditional score notation.

Staying with the score concept there's also the new Score Edit window. Once again, things follow the traditional Pro Tools method, with tracks selected from the track listing to the left. You'll also a find a bunch of parameters for score set up, printing and visuals. And because the screen only displays the tracks you've selected, preparing score for single or multiple parts is very simple.

But this is more than just a printing tool, as you can also enter, edit and modify many note attributes using the floating Event Operations window. And once you're done, print directly from the screen or export to Sibelius (if you own a copy).

What else is new?

The two most interesting additions are the new track compositing features and also track automation controller lanes. Pro Tools already allows you to handle multiple takes using playlists. This system has been extended to include a playlists track view that displays all your playlist takes in individual lanes. This can be created automatically if you're recording in loop mode, but you can also drag in previous takes from the region list.

Each region can then be edited, soloed and copied to a master playlist. There are various other options including region rating (one to five), and matching and filtering to find regions with similar attributes - all fives, say. It's all very reminiscent of Logic's Swipe Comping but, dare we say it, a lot more thorough.

Lanes also make an appearance within PT8's automation. In addition to switching the standard track view to show automation, you can use the lanes tab to add and remove automation and MIDI controller lanes. These are freely assignable to any automatable parameter or controller and you can resize them or shift them up and down just like normal tracks.

Apart from the improved graphics, the first thing you notice about PT8 is the inclusion of session templates. At start up you can choose templates from categories such as Songwriter, Record + Mix and Music. These get you started down the path to, say, a recording, mixing or MIDI programming session. Some of the writing templates even include MIDI patterns within the Edit screen.

One of Pro Tools' strengths has always been its simple interface. Keeping things to two main screens - Edit and Mixer - is a longstanding feature. Adding both MIDI and Score windows changes that dynamic a bit, and that begs the question of how to arrange your working space?

This was something that dogged Logic and eventually Apple opted to copy Ableton's workspace approach. For PT8 we chose to split the screen, with Edit at the top and MIDI or Mixer at the bottom. Toggling windows using the key commands seems to work pretty well.

Pro Tools 8's new instruments add considerably to its out-of-the-box immediacy, and their easy interfaces mean you'll be making sounds in no time. Both Mini Grand and the DB-33 organ are very useable, with DB-33 including some cool cabinet settings (drive, character, spread and mic positions).

As a workstation synth you might expect Xpand! 2 to be the least inspiring instrument, but we think it's excellent. Admittedly, editing is limited to the default parameters that are given to you, but with two onboard effects, an in-built arpeggiator and four parts per instance, you can get pretty creative. And remember, there are hundreds of presets.

We also found Vacuum to be pretty good fun, with the vacuum tube sound adding an extra layer of interest. It's a shame that it's not polyphonic.

In terms of content, Structure Free offers less than we'd expected. With one drum kit taking up almost a quarter of the 885MB sample pack and only 60 patches in total you'll probably feel the same. However, we did find it imported Kontakt and EXS24 libraries easily. In all honesty, though, we hankered for the editing options of the full version.

Finally, Boom is an excellent retro drum machine, with some fine patterns and sounds. The only limitation is that patterns are only 16-step.

The 20 new AIR effects cover a lot of ground and it seems pointless to list all their capabilities. However, there are few gems in there worth mentioning.

First up, the Filter Gate offers great rhythmic gating (with 32 preset patterns), synced timing with adjustable swing, and overall mix balance. Throw in LFO-based modulation and a resonant filter, and a basic pad will never sound the same again.

Talkbox emulates the classic guitar effect, and although it's basically a self-modulating effect (so no external control) the various vowel options allow for some great sounds. In use we found this worked best on sounds with percussive attack and some decay - a bit like a guitar, unsurprisingly.

Non-linear reverb is often criticised as the source of the '80s gated snare' sound. But it's enormously useful for adding space and width to all sorts of sounds. The AIR version works great, and includes a neat feature for delaying the dry signal relative to the reverb. With reverb times up to 1.5 seconds and also a reverse option, this is one of the neatest specialist reverbs we've tried.

Multi Delay is a pretty complex multi-tap design. The five separate adjustable 'taps' have level and pan, while global controls include high- and low-cut filters, feedback and the option to sync to tempo. To round things off there's a cool cross feed selector.

There's no denying that Pro Tools 8 has absorbed a lot from its rivals, and we'd say that it's all the better for it. Even so, existing users should be able to carry on as before without any problems.

But it's new users or floating voters who should be most interested in PT8, as it now offers the creative, writing and programming musician so much more. Where MIDI once felt like an awkward add-on, it now feels fully integrated. And the ever-burgeoning AIR content, both the instruments and effects, bring an all-in-one simplicity that Pro Tools had begun to lose.

So does this make Pro Tools the leading audio MIDI sequencer? That is difficult to say. Up against Logic for example, it might win in the audio stability stakes, but can't match the sheer creative content that Apple's app includes, not to mention the other bundled software.

That said, if you're focused on audio and music production then this may not matter. What's more, the potential to start with M-Powered and ultimately move up to HD is very attractive. In an ideal world, we'd like to see Digi bite the bullet and include more of the existing AIR instruments as standard, but even so, we still think this is a very impressive upgrade and the most exciting change to Pro Tools for some time.