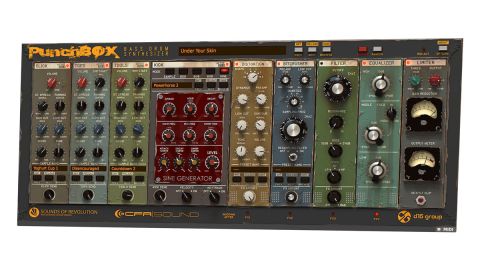 The latest kick drum plugin on the block, PunchBox takes a similar approach to that of its closest rival, Sonic Academy's Kick 2, mixing a synthesised layer with three sample layers, then processing the result with effects, to create sonically rich bass drums of all kinds - although in this case, the synth can be switched out for yet another sampler, too.

In total, 1100 samples are involved, produced by CFA Sound and Sounds of Revolution.

The body of the signal is built in the central Kick module, offering a choice of Roland TR-808, TR-909 and TR-606 emulations, a sine wave generator and a sampler. Here, you'll also find switches for activating velocity sensitivity for all modules and keytracking for the Kick module only.

The other three modules are sample-based, each coming with its own huge library of sounds. Click gives access to over 100 high-frequency transients, Tops deals with more sustained high-frequency content (349 samples), and Tools adds an assortment of other sonic components - over 500 of them, consisting of sub bass, crackle, noise, etc.

The three are identical in their control sets, except that Click lacks a Sample Start parameter - levels, panning and Stereo Spread are adjustable, along with high-and low-pass filters, pitch and Decay.

You can load your own samples into them, too, of course, should you somehow not be able to find anything suitable among those included.

Four to the floor

The four source modules are independently processed by PunchBox's four effects, the amount of signal sent to each one determined by the modules' Send knobs.

The point in the effects chain at which the unprocessed and processed signals are mixed can be placed anywhere in the chain, and by default it's after FX4, immediately prior to the Master Limiter. The effects are reorderable by dragging, and each one has its own menu of presets.

Bitcrusher incorporates both bitcrushing and sample rate reduction (down to 44Hz), and features a Resampling Filter for smoothing things out post processing.

Distortion lets you choose one of six clipping curves, and includes Contour, Tone and pre-saturation compression controls; while the resonant Filter is a multimode model (LP/HP/BP) with 12dB and 24dB/octave slope options.

The three-band Equalizer has a sweepable Mid band (100Hz-10kHz) flanked by High (5kHz) and Low (100Hz) shelves; and, finally, the Master Limiter compresses PunchBox's output at a ratio of 1:inf when activated, and provides VU-style Gain Reduction and Output metering.

The only criticisms we can level at PunchBox are that the controls can be a bit fiddly, and there's no visual indication given when a module is in Solo mode - the Activity lights just go out on the others.

Other than that, with its enormous sample library, intuitive but extensive parameters and effects, and 800 tagged presets, it's a bass drum design powerhouse, and hours are easily lost blending and tweaking the four layers in the quest for the perfect kick.

As with other plugins of its kind, though, proper understanding of what makes a good bass drum sound is a prerequisite, and if you're happy enough using prefab kick samples, it could be considered overkill.