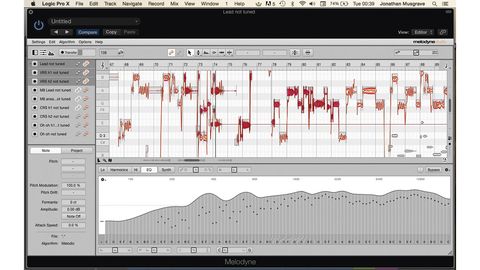 We can't recommend Melodyne 4 highly enough, although you'll want to plump for the Studio version if you can afford it.

From day one, Celemony's Melodyne was a game-changer, but over time it's become not only slicker (the shift from standalone to plugin being the most significant milestone) but also more powerful, most notably with the addition of Direct Note Access (DNA), which enables genuinely effective pitch correction of individual notes within polyphonic sounds (ie, chords and even mixed signals with multiple instruments).

However, maintaining such developmental momentum isn't easy, and with good pitch correction now incorporated into most DAWs (Melodyne itself via Celemony's ARA extension in the case of Studio One, Sonar and Tracktion), version 4 has its work cut out when it comes to wowing us again.

Melodyne is a plugin and standalone application designed to adjust the pitch, timing and volume of both monophonic and polyphonic sounds.

It comes in four editions (Essential, Assistant, Editor and Studio), with playback and editing (edition dependent) compatibility across all four, facilitating project exchanging. Each edition progressively increases the feature/function list, from single-track monophonic pitch editing (Essential) all the way up to polyphonic editing of pitch, timing, formant and level across multiple tracks (Studio).

Melodyne does its thing by analysing the audio (on first playback for the plugin version) in order to establish its pitch (and underlying key), then presenting the signal as a series of waveforms on a piano roll editor.

A range of intuitive tools (depending on which version you're using) are used to edit the pitch and other properties of the signal, with the snap function keeping pitch and timing aligned to the grid.

Those other properties include pitch drift, vibrato, amplitude, and note to note transitions, and all of them are graphically represented, so you can see as well as hear the results of your edits. If the detection process makes any mistakes, both the underlying key signature and individual notes can be corrected with a couple of clicks.

Melodyne 4 (VST/AU/AAX/RTAS/ARA/Rewire/ standalone) is 32- and 64-bit compatible and updates all four versions of the software. Inevitably, many of the new features apply to the more expensive editions (Studio in particular), but common to all is a new configurable single- window interface, better detection of underlying tempo and improved pitch algorithms, including a new 'Universal' one.

This is designed for linear adjustment of polyphonic material (without DNA), essentially serving as a conventional real-time pitchshifter/timestretcher. It sounds pretty good, and is useful for making moderate adjustments to full mixes or more extreme changes to individual elements (vocals, for example) with minimal artifacts.

Staying with algorithms, DNA (in Melodyne 4 Editor and Studio) now comprises two polyphonic algorithms: Sustain and Decay. Sustain is much like the original algorithm, while Decay is better suited to percussive material.

Also new in the standalone versions of Melodyne 4 Editor and Studio is advanced tempo mapping via the Tempo Editor. With this, a graphical tempo map is generated upon analysis of the input signal, and two map edit options are offered, enabling you to improve the accuracy of the map (Assign) or edit it to change the playback timing (Edit).

It's easy to use and works well for subtle tightening of timing, as well as more dramatic quantisation. Maps can be exported and imported, too, making it easy to conform multiple audio files to the same timing profile. Understandably, this feature has been intentionally omitted from the plugin versions, as it would clash with the host DAW's own tempo handling.

The two biggest changes to Melodyne 4 have been saved for the Studio edition. First, Sound Editor is a new creative editor for harmonic manipulation.

Second, Melodyne's existing multitrack capabilities have been substantially overhauled, and multiple audio tracks can now be handled in the plugin as well as the standalone version. It works by enabling any one running plugin instance to view and edit the contents of all of them.

It's a truly excellent 'DAW within a DAW', allowing simultaneous transfer (analysis) and editing of multiple tracks, and application of macro pitch and timing edits to individual notes across them.

The standalone version still has the edge, though, as it facilitates the tempo mapping mentioned above globally, across multiple tracks. Tempo mapping of audio is nothing new and most DAWs now include marker-based systems for timing manipulation, but they're never perfect and it can be risky entrusting your multitracked drums to them with confidence.

Melodyne 4's tempo map system is quite simply better than the rest, not only in terms of the simplicity of conforming a full take to a map, but also the sound quality and speed with which it analyses and updates the audio.

However, what makes it really special, is that quantising isn't the primary focus of the analysis, meaning that retaining a live feel and adjusting the timing are certainly not mutually exclusive.

We're not being hyperbolic when we say that Melodyne 4 is one of the greatest audio applications ever made.

Celemony's amazing toolbox now places equal emphasis on pitch correction, timing manipulation and creative audio processing, and is prodigiously successful in all of those areas. Our only criticism is that the potentially prohibitive pricetag of the Studio edition will prevent many users from appreciating it at its best.