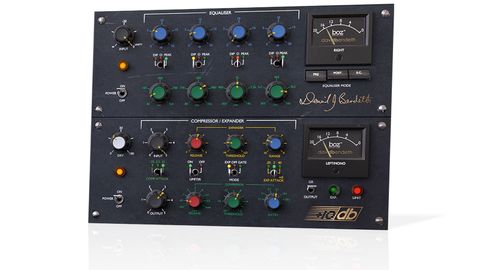 It's great to see such characterful hardware captured so effectively, even if that includes the frustrating aspects of the originals.

The EQ is four-band, and all four bands are bell shaped. Switches select between attenuate (Dip), boost (Peak) or off (O) modes for each band, and there's up to +/-20dB of gain on tap.

Frequencies are continuously sweepable, with considerable crossover between band ranges. The EQ can be positioned pre- or post- compressor/expander or fed into its sidechain.

The Expander section includes continuously variable Threshold, Release and Range (0 to -20dB) knobs, with three Attack speeds (0.02ms, 2ms and 40ms) and a Gate mode. Finally, internal levels are handled by the EQ Input and Compressor Input/Output knobs, and the Dry signal level is adjustable for parallel processing.

+10dB's compressor section behaves in one of two very distinct ways, depending on the Ratio. The first three settings up to 3:1 have a soft knee behaviour, but switch to 5:1 and beyond and it becomes an aggressive, 'snap'-style processor that works particularly well on snares with the attack set to 2.5ms or 25ms.

In contrast, the fastest attack time nails pretty much every transient, and so needs to be approached with caution. With its fixed threshold, the Limiter only stops the highest internal peaks.

The expander delivers incredibly tight results, with its fastest attack potentially adding clicky attack to sounds, which can be useful at times. It's very easy to use, and emulation of the original hardware's hysteresis design helps with setting the threshold.

The EQ is an interesting beast, with its band frequency overlaps enabling more than 20dB of gain to be applied to certain ranges, and combinations of boost and cut at slightly different frequencies creating overshoot-style curves.

The Q widths are unusual, too: they're fixed and don't change with gain adjustments, but the upper and lower bands are narrower than the mid bands, making them better for more surgical changes.

Even at low gain levels, they do a great job of adding punch to kicks and crack to snares, reminding us of the classic API EQs. Caution is called for at higher gains, though, as they can feel horribly unnatural. The middle two bands are broader and, used with care, can add good bell-shaped sweetening.

The EQ-to-sidechain option can be used to trigger compression and expansion that's more or less sensitive to specific frequencies.

+10dB gives a fine recreation of the classic A&D sound, with its snappy compression, powerful peak EQs and responsive expander. Much like the hardware, though, it can be a bit fiddly for the novice engineer.