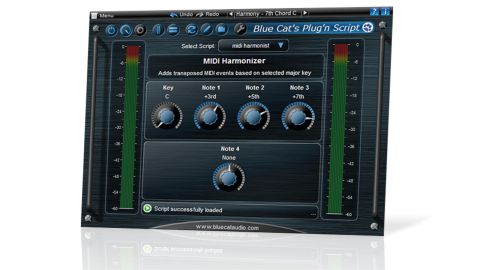 Hard to get into for non-programmers, but rewarding for the dedicated, Plug'n Script is an interesting new tool for DIY audio.

DIY 'construction kit' applications enabling musicians to build their own plugin synths and effects come in many flavours. From the graphical styles of Reaktor and Max MSP to the more 'hardcore' scripting of CSound, Reaper JS or the Lua scripting found in Renoise and Psycle, there's a wide-ranging array of tools out there.

Bursting into this nebulous market is Blue Cat Audio's Plug'n Script (VST/AU/RTAS/AAX/DirectX), a cross-platform Swiss-army knife of plugin construction, giving you the power to build your very own synthesisers and audio/ MIDI effects from right within your DAW.

Plug'n Script is actually a technology that Blue Cat has had under its hats for some time, using it to prototype their own plugins before committing to full-scale releases.

The technology behind Plug'n Script makes it possible to harness the power of all manner of audio modules using scripts, which aren't as scary as they sound - they're actually simply plain-formatted text files.

To get started with Plug'n Script, you have to create or load a script. The built-in scripts are easily selectable from the Factory Presets menu, including the likes of a ring modulator, phaser, distortion unit and organ, etc.

If you save a user-built script, this will, handily, also appear in the preset menu. MIDI effects function in the same way, although it's important to note that only DAWs that support external MIDI effects will be able to use them, of course.

The scripting itself is done via a text editor of your choosing. Type in a few lines of code and you can create a knob to control the gain of a filter, attack of a synth or whatever.

As soon as you're done editing, the fruits of your labour can be heard in the time it takes to save your file and hit the Reload Script button in the Plug'n Script interface. It's also possible to go one step further and create your own skin for the interface, but if you don't have the required graphical skills, you'll be stuck with the very dated-looking default look.

In the absence of well-written scripts, clearly the usefulness of Plug'n Script would depend on your imagination and programming abilities. Thankfully, there's an online repository to which users can upload their scripts for others to play with, and we'd hope to see some great things there in time.

Downloading them is a manual process that involves visiting the website, however - ideally, this system would be directly integrated into the plugin itself.

The scripts bundled with Plug'n Script are certainly nothing to write home about, sadly, and we would love to have seen something that really shows off its potential beyond the basic stuff that we've seen a hundred times before.

Because of the time, skill and effort required to make the most of it, the appeal of Plug'n Script is likely to be narrow, but it could certainly be a powerful tool if you have the aptitude to harness it.