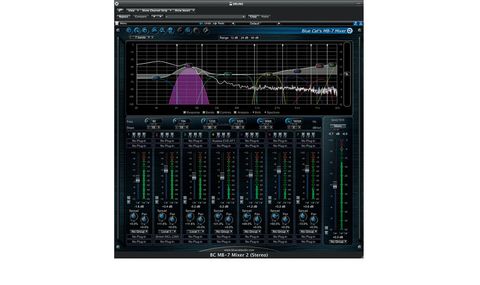 It's a couple of years since we looked at Blue Cat's original MB-5 and MB-7 plugins as part of its MB Dynamix Pack. At the time, although MB-5 Multiband Dynamics was the more powerful of the two, it was MB-7 that captured our imagination with its flexibility and creative potential. Now, following a number of updates to version 1, we have the fully overhauled MB-7 2.0.

MB-7 is, in essence, a multiband mixer, dividing the source signal into up to seven frequency bands, with user definable crossover points and slopes (6-96dB/octave). These bands can then be rebalanced and processed in various ways, the immediate options comprising Level, Pan and Spread, with Bypass, Mute and Solo available for each band. Spread is a mid/ side balance control - useful for increasing or decreasing stereo width.

So that's where things stood with version 1. Version 2 introduces several new features, but by far the biggest is the ability to insert up to four regular VST plugins into each band - two pre and two post fader.

Yes, MB-7 2.0 is a VST plugin host (not VST3 yet, we should add), and with this in mind, Blue Cat has also made available a simplified 'single band' skin (SB-1 Mixer), for hosting without the multiband side of things complicating matters.

With MB-7 2.0 available in AU, RTAS, AAX and even DirectX formats, this means VST instrument and effects hosting inside Pro Tools and AU-only software such as Logic Pro, so if you've just upgraded to Pro Tools 11 and are awaiting AAX support for your favourite soft synth, MB-7 2.0 could save the day.

Truly useful stuff, and enough to warrant the price alone for many, we're sure. There's more to the update than just that, though...

The MB-7 interface has been redesigned to line up with other recent Blue Cat plugins. This means easier configuration of the GUI with foldaway panels for the analyser and fader sections, three window size options and automatic window rescaling dependent on the number of active bands. You also get a better integrated browser, with a library of categorised presets, and an excellent undo/redo function, which even rolls back preset changes.

Also worthy of note is that you can customise range and response curve settings for automatable parameters, with MIDI and automation settings accessed directly via the dropdown menus under each control. Oh, and internal parameter precision has been increased to 64-bit.

Previous MB-7 features that are worth highlighting here include eight local groups for ganging parameters and eight Global groups for doing the same thing across multiple plugins, as well as the Quick Link and Reverse Link options for linking bands.

There's also Blue Cat's cross-plugin MIDI-based linking, which enables you to achieve multiband sidechaining across plugins using the MIDI input/output configuration. As we discovered before, this can be fiddly to set up and use, and the implementation is DAW-specific.

Back to the future

As we noted in our review of the original MB-7, although multiband control of width and panning can be used very creatively, particularly with Reverse Linking and automation, we found the plugin really shone when used more reservedly, for mixing purposes rather than wacky effects. This remit hasn't changed in version 2, but we now have better analysis options, including two spectrograms (greyscale and colour), and the ability to view all channels individually or together when using the spectrum analyser.

This last displays two curves (blue is left and red is right for a stereo instance), so that you can immediately see the influence that your panning and spread settings are having. Also, soloing a band gives analysis of just that band, which can be particularly useful to fine-tune the frequencies of crossovers.

Back to that plugin hosting, then, which makes MB-7 a very flexible mastering processor, amongst other things, enabling you to build a tailored multiband processing chain from your own collection of plugins. On the downside, you can't open/close all hosted plugins with a single click, which feels rather clunky.

Also, although you can have multiple VST plugins open onscreen at once, you can't link their controls, for mass bypassing, say. These are minor gripes, but they do hobble the workflow a little. However, we were genuinely surprised at how smoothly MB-7 2.0 works as a host.

In the final summary, MB-7 2.0 is something of an oddity: a flexible multiband stereo manipulation plugin that doubles as a VST host. While its functionality as the former remains largely unchanged in v2, the new plugin hosting has been done very well indeed, and the inclusion of the single-band skin makes quick- setup hosting easy to achieve. Multiple VST plugins across multiple bands can be a lot to handle onscreen, though.

We understand that imminent updates will feed tempo sync to hosted VSTs, and that Pro Tools AudioSuite format will also be added, which is very good news. Hats off to Blue Cat for coming up with such an innovative plugin.