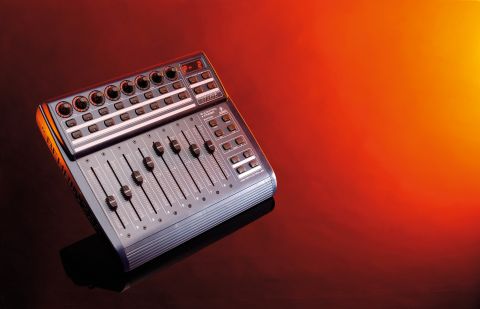 A firmware upgrade has made an already good product outstanding. Superb value for money.

The Behringer BCF2000 features eight motorised faders, eight rotary encoders (each of which has an LED position indicator and a built-in push switch) and 30 push buttons (most of which have built-in on/off indicator LEDs). The unit connects to your computer via USB or MIDI, but must be mains powered.

Thanks to several significant firmware upgrades, the BCF2000 is now capable of emulating a number of industry-standard control surfaces (including the Logic and Mackie Controls). As a result, the unit is a viable budget alternative to the expensive heavyweight solutions - the BCF2000 integrates very well into a wide variety of software packages.

The unit is supported natively within Reason 3 and offers a high level of integration after almost no setup time. For advanced users, the BCF2000 features comprehensive programming options (you can delve into the murky world of System Exclusive level programming should you so desire). For the benefit of us mere mortals, Behringer also provide graphical programming software.

In most respects, the BCF2000 is a pleasure to use. However the motors that move the faders are a little too noisy, and this could be a problem when you're mixing at low or moderate monitoring levels.

Also, though the build quality is more than adequate for home use, live users may want to consider a sturdier unit. Ultimately, though, the Behringer BCF2000 is a wise choice - it has an impressive feature list and offers great value for money.