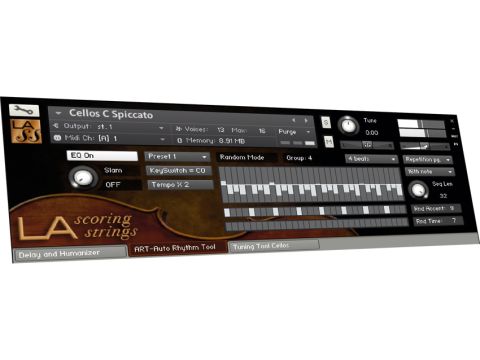 Not the cheapest, but the performance options here set LA Scoring Strings apart.

Those of you who've been watching the development of sampled string libraries from the sidelines might be forgiven for wondering whether there can possibly be room for yet another collection of stringed instruments designed for film and TV composers or pop arrangers.

However, the reason this area is still up for grabs has less to do with the quality of the string samples but more with the authenticity of their performance in use. Enter LA Scoring Strings (LASS), whose remit it is to tackle some key areas of shortfall among the competition.

The library plays back through Kontakt or the free Kontakt Player and once you've installed the five bundled DVDs and downloaded the Version 1.1 update, you're away.

The first of LASS's unique features is its capacity to split the size of the string sections into a number of divisi blocks. In orchestral performance, pairs of string players form desks and while, most of the time, musical scoring dictates that both players perform the same notes, it's possible to indicate via divisi that one player should play a top-line, while the second should play a lower line.

Impressively, divisi has been comprehensively and accurately sampled with players 'in situ' for LASS, so the awkward placement issues associated with other libraries when such scoring is attempted are avoided.

Additionally, presets have been created from solo performances by the lead player in each of the string sections, which form the First Chair library. Again, there are useful implications here - a true string quartet using just the lead players with no accompaniment, or a solo and ensemble approach, where the virtual leader of each section can play his own part, with ensemble backing from those players behind him.

The crucial thing here is that the range of colours the library can produce is much wider than most of the competition, partly because these solo players have been recorded on the same big sound stage. However, the library really comes alive with its variety of in-built 'scripts' which act as performance-enhancing tools.

These vary from humanising modules that randomly generate less than perfect pitch, to triggerable legato/portamento style performances, to an in-built step sequencer that lets you assign rhythmic figures to phrases for any instrument you like.

Additionally, the AMG toggle switch enables you to disengage the dreaded automatic machine-gun problems encountered by so many sample libraries. There are many useful scripts here and it's easy to engage those you need via MIDI control change messages to breathe life and soul into your music.

This library is excellent. A bit like Gary Garritan before him, there's a single man with a vision behind this library, namely Andrew Keresztes. While he's set himself an almighty challenge to record, edit, promote and distribute this library, he's delivered. The recorded quality of the strings is wonderful and while the default size of the full string orchestra (it's a 40GB install) may be larger than some will require, the option to limit player numbers and to divide those as described makes this a versatile option for anyone looking for a fresh-sounding sampled string library.

The price here dictates that this is only for pros or very serious amateurs, but - particularly for those composing for TV and film already - this library definitely offers string flavours you'll struggle to find elsewhere.

Listen to what LA Scoring Strings is capable of: