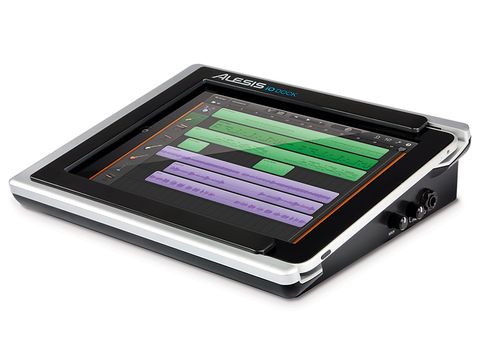 All the connections you need to turn your iPad into a functional studio. What's not to like?

We all know by now that the iPad holds plenty of potential as an audio device with apps of many flavours (soft synths, guitar amp sims, multi-track recorders and so on) available and doubtless many more to come - we've even had the first iPad album.

Tapping into that potential - if you excuse the expression - however, hasn't always been overly user-friendly.

There's the built-in microphone on the iPad itself of course, and the likes of Line 6's MIDI Mobilizer for MIDI connectivity, plus various devices on the market designed to connect guitars and other instruments, but what would be really practical would be a single device that offered all the various connections you'd need for musical use with the iPad… And that is exactly the role that Alesis has defined with their new iO Dock.

What you get is a light but solid wedge-shaped universal docking station that sits on your desktop or knee, and holds and protects an iPad or an iPad 2, (iO Dock includes a plastic insert for the smaller iPad 2), putting it at just the right angle for viewing and operating.

All the connections are logically grouped - audio round the back, MIDI on the left side, monitoring on the right. Two inputs are provided on combination XLR/jack sockets with phantom power for condenser mics, (globally switched for both), and a Hi-Z switch to allow guitars to be plugged directly into input two.

In addition, there's a video output so you can connect a bigger screen plus an assignable quarter-inch footswitch input, which enables remote control of any app-defined function such as stop/start or record.

In use, your iPad simply slides into place and mates with the Alesis via its 30-pin dock connector. Power comes from a mains adaptor, so the iO Dock charges your iPad as you work and there's a useful locking clamp to make sure the power cable doesn't come loose.

Trying out the iO Dock with GarageBand, we had no problem playing the keyboard instruments from an external keyboard or getting audio from a plugged-in microphone and guitar into the iPad where it can take care of the conversion to digital. If desired, a useful direct monitoring switch can let you hear your analogue input signal alongside the iPad's output when recording.

Alesis says that the iO Dock is built to accommodate all current app-development standards including Core MIDI and, overall, we found that it works superbly with a range of apps.

Be aware, though, that some apps are not compatible with the iO Dock - IK Multimedia's Amplitube for instance, at the time of writing, doesn't 'see' the iO Dock and will only accept an input through devices like its own iRig, plugged into the iPad's headphone.

The bottom line is that the iO Dock is a great idea that transforms your iPad into an extremely functional musical production unit - and it's nicely priced too. Connect the iO Dock to a pair of powered monitors, start GarageBand up and you'll have a brilliantly compact desktop studio.