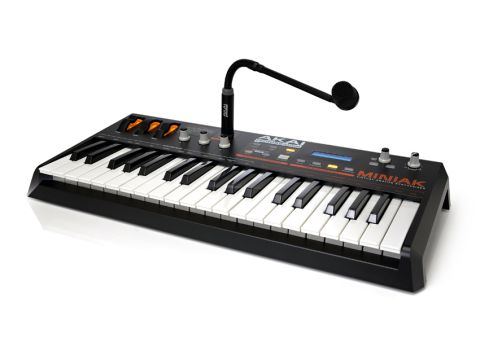 A great set of fresh, powerful sounds but MiniAK is let down by its lack of editing and poor vocoder.

Think Akai, and synths are probably the last thing that comes to mind. However, the MiniAK isn't Akai's first foray into synthesis by any means.

In 1984, Akai released its AX range of analogue synths (AX80, AX73, AX60 and later the VX range) and although these synths came at a particularly tricky time for analogue synthesis with the advent of digital technology (and rule of the Yamaha DX7 in particular), they were nonetheless very capable.

So it's good to know that Akai does have a solid synthesizer heritage at its foundation, as well as their thorough knowledge of sampling.

Akai became part of the Numark group in 2004, alongside Numark and Alesis, so combining expertise from across these companies. The MiniAK is clearly a product of the partnership with the Alesis team as it is in fact a re-branded and improved Alesis Micron.

The MiniAK is a good-looking machine, more serious looking than its chirpier Micron brother. Its black livery is very much current Akai style and the branding is very strong all round - make no mistake, you know what you are playing! The build quality feels good for a low-priced synth too, with the front panel knobs, dials and buttons feeling reassuringly solid.

It's great to see three wheels on the front of this synth. We don't know why more manufacturers don't do this. Our Yamaha EX5 had three and we much prefer wheels to dials as they are so quick to use and very tactile. The MiniAK's three yellow-backlit wheels (pitch plus two assignable wheels) have a nice textured rubberised surface to them, unlike those horrible overly sprung hard plastic wheels you often find on products around this price point.

A quick look around the interface reveals there is little else to grab apart from the X, Y and Z assignable dials, though in practice, these work very well and as much as it would be nice to have more control (it would be great to have dedicated envelope and filter controls) there is enough here to draw you in and keep you involved in the sound creation and performance areas.

To assign the XYZ dials to a function, it's simply a case of scrolling to the function you want using the data dial, pressing and holding it and turning the corresponding XYZ dial that you want to assign the function to. Very easy.

Another not too shabby aspect of the MiniAK is its keyboard. Yes it's short (37 notes) but it's fine to play - slightly too stiffly sprung but certainly not bad. Unfortunately, bad is something that can be associated with the screen. It's very difficult to read at the best of times. Blue writing on a blue background is not the best combo, and the screen can only be easily viewed from directly above it. And, because it's so deeply set, it's hard to read from certain angles and can be obscured by the bottom-edge of the screen. Some serious marks off here then, especially as the MiniAK relies so heavily on its screen for programming.

Other controls on the front include up and down octave buttons (you can also set the MiniAK so that when changing octaves, held notes stay where they are but the newly played notes are in the newly selected octave) and there are controls for pattern play which will allow triggering of rhythmic patterns from any of the keys while still playing other sounds. There's a phrase arp button, which allows you to record phrases on the fly for instant playback, plus a latch for the arp/sequencer, so you don't have to have your finger down all the time.

One conspicuous difference between the MiniAK and the Micron is the inclusion of a gooseneck mic for the vocoder, much like the Korg R3 and microKorg XL. More later.

Programming is unfortunately the MiniAK's downfall. All in all, it's pretty slow and confusing and relies wholly on the data dial and screen. It is useful, though, to have the keyboard linked to particular key areas of editing such as filter, oscillators, pre/post mix levels, envelopes, LFOs, track (the tracking area which allows non-linear modulations) and mod routings within the presets and for the mod wheels and dials.

We're impressed by its ability to create pretty much any type of analogue sound you could want, from lush Jupiter/Prophet-like pads to edgy Moog-like basses, serene strings, and cutting leads. Plus it doesn't have that plasticy brittleness that many soft synths and some VA synths often have.

There are 16 filter types on board that will cover any type of tone you could want and they all sound very good. There's enough low-end oomph plus plenty of high-end sizzle and a punchy midrange. There are Minimoog, Jupiter and Prophet filter emulations plus the usual low-pass, high-pass, band-pass and combs and more unusual vocal formant filters and a phase warp filter for those trance leads.

While on this subject, the presets certainly cater for the dance crowd but the scope of this instrument goes far beyond that.

The MiniAK has 12 freely-assignable modulation slots with source, destination and level available for each. Pretty much any parameter can be assigned to anything you like - the scope is vast! The tracking generator is a neat feature too, breaking up normally linear modulations into 32 independent segments for making complex and evolving sounds.

Another bonus with the MiniAK is the stereo audio input allowing you to route audio through the filters and effects in real time. A 40-band vocoder is also provided, though it's not the strongest element of the MiniAK. Although it's definitely a useful addition, it does take some work to get useable sounds from it, something which can't be angled at the MiniAK's general sound bank.

Effects-wise, there are drive effects plus two effect slots. The first slot includes mod effects such as chorus, flangers and phasers while effect slot two includes mono and stereo delays, reverbs plus the vocoder. All these effects are musical and enhance the sounds in a flattering manner.

There's a hugely impressive array of sequencing and arpeggiating available in the MiniAK. Sequences can work on their own in standard mode, or in multi-mode where several parts or sequences can be set up alongside arpeggiator patterns, preset/user sounds and rhythm patterns.

Sequences can also be handily triggered across the keyboard at different pitches and can be layered with rhythms too, enabling you to trigger a backing track with a single key. In multi mode you can have sequences, rhythms, arpeggiators and standard sounds all covering different areas of the keyboard.

The most important component of the MiniAK's sequencing engine is a Pattern, where all note, rhythmic and pitch info is stored. Within a Pattern you can either choose it to behave as a 'sequence' or as an arpeggiator pattern. Rhythm mode acts like a classic drum machine with overdub looping - great for utilising the many great analogue style drum sounds onboard.

Loving the sounds and appreciating the power of the MiniAK is one thing, but it's that programming interface that keeps spoiling the fun. It is possible to buy a cheap knobby hardware unit mapped to the appropriate CCs, but obviously we'd prefer a bigger screen and more controls. Moreover, the sequencer - while a great addition - is often a pain to program in step-edit mode on such a small screen. Fortunately the real-time mode is as obvious as it should be.

Our biggest moan, though, has to be the lack of USB port which means no software editor. This seems like a glaring omission considering how much the MiniAK could do with one and how ideal it would be as a portable keyboard to use with a laptop on the go. The vocoder is fun, and instant, with 40-bands, but we still had problems with it picking up diction clearly using the attached mic. It's a cool addition, just not as good, quick or impressive as the microKorg's.

Having said all this, it's the sound that counts and the MiniAK has today's analogue, FM and digital timbres down very well, even surpassing established VA synths that we've used at higher price points. If you don't mind a frustrating interface, you're a fan of presets and you're not in it for the vocoder, then at this price, the MiniAK is a great way to get some fresh sounds into your mix.

Listen to what the MiniAK can do: