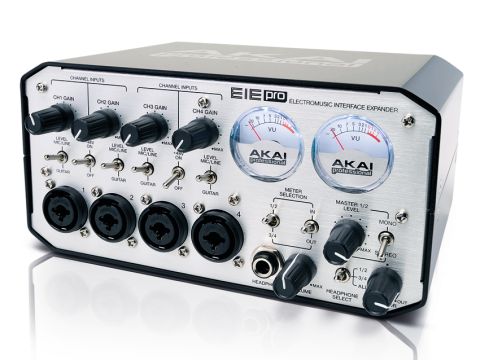 With unique features and enhanced audio resolution, the EIE Pro is impressive at this price.

Akai's product range has expanded over recent years but it's EIE interface may have slipped beneath your radar.

This unit offered four-channel recording but capped audio at 16-bit resolution. Fine for most applications but limited by the standards of some competitors, and it's perhaps no surprise that Akai now returns with a more commanding version of their intriguing EIE concept, the 'Pro'.

The interface is a chunky, solidly built unit. The rear panel features four audio outputs, designed primarily to drive twin pairs of studio monitors, as well as four inserts so input connections made on the front panel can be further enhanced with hardware effects such as compression or EQ.

As well as the USB connector that provides interfacing with your computer, a further three USB ports are offered. These can be used to extend the number of connections your computer offers, so they can host external hard drives or even USB keys used to enable your plug-in libraries. Standard MIDI In and Out ports are also supplied.

At the front, four hybrid inputs sit beneath rocker switches that enable you to change input types between Mic/Line and Guitar sources. Phantom power can be switched on in pairs, with a switch each serving inputs 1 and 2 and inputs 3 and 4.

To the right, twin VU meters keep you updated with levels with options to monitor either pair of inputs or returns, while a master level dial serves as the main monitor in either mono or stereo. It's an impressive feature-set that allows for huge levels of flexibility.

Our only gripe is that the input ports are all on the front panel. We don't know a studio owner who is happy for mic cables to trail across the front of their workspace, and would prefer EIE Pro to feature some rears too.

But for a band simply wanting to make 'four instruments appear separately in their DAW', this is going to be magical.

In use, the EIE Pro is a joy. We were initially concerned that the VU meters might not provide the most accurate visual feedback when setting levels, but this proved not to be the case. They're back-lit and, better still, their lights change to a 'warning red' when signal overload is detected.

The EIE Pro's increased audio specs over the original EIE provide a pleasing openness in sonic character. There's a clarity and a natural brightness which doesn't colour the sound but adds a slight sweetness to microphone sources in particular.

The unit doesn't quite provide the 'classic' Focusrite sound of the Scarlett 2i2 but this isn't to criticise it; Akai's pres are more than capable of great results.

It's the flexibility of this unit that really counts, with monitoring offered across the input/output stages and two sets of monitors readily accommodated. We suspect this flexibility will be the secret to its success, particularly with the (to our knowledge) unique selling point of offering 'studio expansion' via the additional USB ports and the dedicated insert points.

All in all, it makes the EIE Pro a real workhorse and the phrase 'jack of all trades, master of none' finds an exception here.