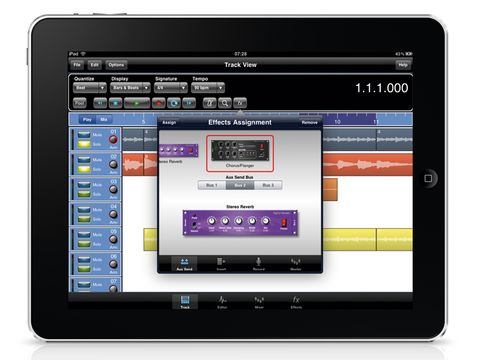 If you just want to record and mix audio on-the-go, then Meteor is highly recommended.

MeTeoR is a multitrack recorder for iPad offering up to 12 audio tracks and featuring a built-in mixer. It can use either the built-in audio capabilities of your iPad, an adapter such as iRig/Ampkit, or an iOS 4.2-supported USB audio interface.

All the basic trimmings you'd expect are included such as a sample editor, simple (though slightly fiddly) automation and effects. The effects are very good, including reverb, stereo delay, chorus/flange, tone boost, compression, distortion and EQ.

Our only objection is that the last three are paid add-ons, which isn't made clear on the purchase screen, so budget for at least another £1.79 each for compression and EQ, as both are pretty much essential, we'd say.

Other nice touches include sidechain compression, track freeze, three send buses, fast loading/saving and a great no-nonsense manual that tells you how much you can realistically expect from the app and how to maximise its potential.

Even for such a compact app, we still think there are a few omissions, including track-labelling and track delay. But it's easy to forget about these in use, as the sound, look, layout and ergonomics are truly fantastic, including the mixer.

And with the ability to import audio via iTunes and export as cCAF or WAV, simple but professional-sounding results can be had. This is definitely a tool, not a toy.

Should you get it? Since it's got no virtual instruments, bundled loops, etc, it is primarily for those who just need to record and/or mix audio on the move, so it could be useful for anyone recording live gigs or demos out and about. It's also good for laying out and combining voice recordings or soundtracks (you can import video using a paid-add on).

As great as MeTeoR is, if you don't fall into one of the above categories, you might not get much out of it. If mobile recording and mixing are your thing, though, it's highly recommended.