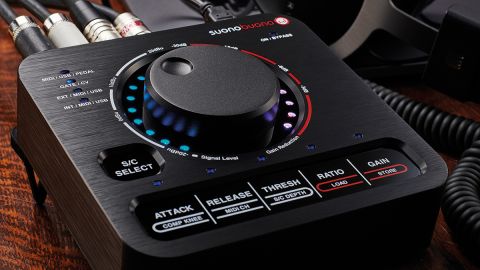 The nABC offers a fresh, musical take on a ubiquitous compression technique, built into a well-designed hardware package

Launched on Kickstarter earlier this year, the nABC is the debut product from Swedish developer Suonobuono. The name is an initialism of Not Another Boring Compressor, a bold mantle that the nABC lives up to thanks to a design ethos distinct from much else on the market right now.

Essentially, this is a hardware analogue compressor albeit with a major emphasis on sidechaining. To facilitate this, alongside its stereo main signal path, the nABC features a variety of both analogue and digital inputs, allowing you to route pretty much anything that takes your fancy into it to provide a sidechain.

The hardware design itself is compact and neat. The effect is built into a sturdy metal chassis focussed around a central control dial that looks a little like a real world version of one of Waves’ One Knob plugins. That rotary adjusts all effect parameters, used with a row of selector buttons that jump between a fairly standard set of compressor parameters – attack, release, ratio, threshold, output gain, and so on.

To the left is a button for engaging one of four sidechain modes, dictating which inputs are active at any one time. The sidechain can be triggered by incoming MIDI notes, either using the USB connection (which also provides power) or the included MIDI to 3.5mm jack adapter. These inputs are joined by two more 3.5mm jack inputs, which act as external audio/CV and gate/pedal inputs respectively. Dependent on which mode is currently active, different combinations of inputs will be active at any one time, so it’s possible to trigger sidechaining from multiple sources at once – for example, simultaneously via an incoming audio signal and a MIDI trigger. The nABC can also be set to respond to its own internal audio path for more traditional duties.

‘Does the world really need more pumping sidechain compression?’, you may ask. But rest assured, the nABC offers a pleasingly musical take on it. The compressor itself is smooth and musical – the manual describes it as responding more like a synth amp than a classic compressor – and is particularly good at adding a pulsating rhythmic feel to synths and melodic sounds without the results feeling too abrupt or jagged. It’s not necessarily designed for straightforward compression, but does a nice job of meshing synth parts even without engaging a sidechain.

While there are tons of cheaper plugins capable of similar effects – even in most DAWs – the nABC’s distinct character is enough to justify its existence. The unit itself is thoughtfully designed too – clear light guides give realtime feedback for input and compression levels as well as parameter settings, and easy-to-access preset storing and bypass functions add to the usability. The flexible inputs are the highlight here though, meaning this should appeal to producers wanting sequenced analogue compression in their DAW, live performers after a pedal triggered effect and hardware-heads looking for something that will play nice with their analogue gear.

MusicRadar verdict: The nABC offers a fresh, musical take on a ubiquitous compression technique, built into a well-designed hardware package.