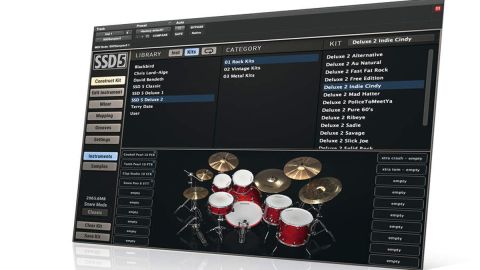 If you want an easy way of expanding your e-kit sounds for recording or just jamming, SSD is a lot of fun, and most importantly it sounds great too.

Either used to bolster drum recordings in need of fattening up, or providing the drum sound in its entirety, Slate’s punchy, beefy-sounding kit samples have played a huge part in the democratisation of big-studio drum sounds.

While we may or may not disagree with the use of sample replacement - blending pristine sounds with that of our pride and joy - the most useful application of Slate’s samples for us drummers is with our electronic kits. Now into version 5, SSD comes with a hefty library of mix-ready sounds that can be played via MIDI from our kits, giving us plenty of expansion from the onboard sounds in our modules.

SSD5 runs as a plug-in within your host software (Cubase, Logic Pro Tools etc), and comes with samples of over 250 instruments arranged into kit presets. However, not all of these are new for version 5. Inside we also get presets from SSD4, as well as Slate’s signature kits based on some of the greatest drum sounds committed to tape (Metallica, Nirvana, Led Zeppelin). For this version, there’s a lot of work going on with the sample playback engine and user interface which has been redesigned from the ground up in order to enhance the realism of the sounds.

The application’s interface is split into a number of different screens offering control over kit/drum selection, mapping to the MIDI notes from your kit and mixing. There’s also a lot of flexibility for individual sound properties such as pitch, close/room mic position blending, dynamic response and an ADSR envelope for each kit part, while the mixer section offers comprehensive control over mic levels and routing  back to your DAW for further processing with EQ, compression etc.

We started our review by downloading the samples from the company’s site. The library is split into eight parts, plus the plug-in itself. It’s worth noting that all of Slate’s products require an iLok dongle, or iLok account to authorise. While it did take a while for us to download and get set up, it was painless, and we’d suggest setting your computer going while you’re doing something else. In all it was about two hours from our first download starting to us hitting a pad.

While there are certainly a number of changes in the interface, the first impression is definitely one of familiarity if you’ve used Steven Slate Drums before. We were pleased to see though, that the presets mapped perfectly to our Roland kit’s default MIDI notes straightaway, where in previous versions there was an element of rearranging the mapping.

Likewise, whatever is going on under the hood has worked: the samples feel and sound more ‘organic’ in response to our hits, with a much more natural, less mechanical sound between velocity levels, even with the kits and samples from earlier versions.

Steven Slate Drums has always been known for its heavy, rock-friendly sound, and this is no exception. There are some phenomenal kits included within the new Deluxe 2 sample set ranging from pointy, weighty kits brimming with clarity and cut, to big, open, roomy-sounding drums. But even with the inclusion of some more jazz and vintage-oriented sounds, there’s still a signature flavour of SSD’s modern sonic aesthetic. Another welcome addition is that of hand claps, cowbell and tambourine, which while simple are a handy inclusion.

Since the last SSD release, Toontrack has raised the bar significantly by combining a mammoth library with additional features such as effects processing, sample replacement and more. With Slate’s Trigger being an industry-leading application for sample replacement, we wondered if it might include some of the technology in SSD 5, but sadly not.

It’s at this point that we should note that SSD 5 comes in at around £100 less than Superior Drummer 3, so while they might seem like a natural comparison, this isn’t really the case any longer. With this version, we’d suggest that SSD positions itself nicely as one of the go-to products for drummers looking for high-quality, yet still affordable sounds with which to expand the scope of their e-kit. It’s still very much rooted in the world of classic/hard rock and metal overall, but that covers a lot of ground for many.

One of the key strengths of Steven Slate Drums is its ease of use: you don’t need to get bogged-down in further processing. If the Audix D6 is the no-fuss kick drum microphone, SSD is definitely the plug-and-play sound source for immediacy with album-ready drum sounds from your e-kit.