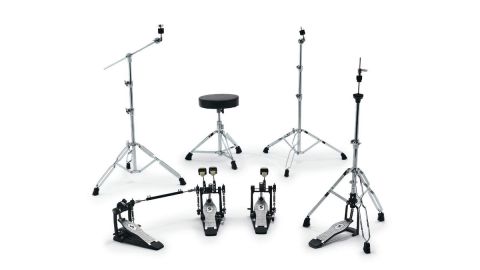 The mid-range 52 series punches well above its weight with heavy-duty build quality and some impressive features. The pedals play particularly well and we’re amazed at the prices.

Since 1995, Stagg has become the benchmark across the musical instrument market, particularly when it comes to affordable, quality entry-level gear.

From kits and cymbals, to percussion and accessories, Stagg’s drum range is ever-growing and now includes this brand-new professional 52 Series hardware range.

The 52 Series encompasses a straight cymbal stand alongside a telescopic boom option, snare stand, hi-hat stand, single and double bass drum pedals and a drum throne. All stands have double-braced legs making them extra strong and all hardware is finished in glistening chrome.

Both cymbal stands incorporate three tubes (25, 22 and 19mm), which gives the straight stand a maximum height of 145cm and the boom stand 180cm. Both are sturdy and reassuringly weighty at 2.85kg and 3.35kg respectively, although still noticeably lighter than similar offerings from the likes of Tama or DW. Both stands feature an omni-directional tilter, which not only moves in the standard back and forward motion but can also spin on its axis through 360 degrees of adjustment. The boom arm can also be retracted into the stand for a compact pack-down or for use as a straight stand in tighter spaces.

The hi-hat stand features adjustable pedal tension via a notched plastic collar situated at the top of the spring. The pedalboard is brushed stainless steel mixed with black imprints that match both the single and double bass pedals. All pedals feature non-slip rubber pads and retractable spikes for extra grip on carpeted surfaces.

The bass pedals feature a steel base plate, which gives them a higher-end look and a sturdiness that belies the price. The double pedal comes with an extra spring assembly that can be used to convert the slave pedal into a secondary single pedal.

This is a useful feature for double bass drum players who may switch between using one bass drum or two. The three legged throne has a 12.6" seat with a black vinyl covering, extra-wide leg base and oversized rubber feet. Rather than the notched system of entry-level thrones, the 52 Series base uses a threaded height adjustment, which allows the seat to be raised and lowered by spinning it clock-wise or vice versa. The whole rod can be raised for more extreme adjustments and a large lock is provided to secure the rod in position. The base is notably heavy-duty and actually weighs more than the straight cymbal stand.

The width of the double-braced legs and sizeable rubber feet afford the stands a decent foundation, although the cymbal stands do present a little flex when fully extended. The boom stand shows absolutely no sign of strain with a 12" tom suspended, plus an 18" crash cymbal mounted on the boom arm, although it does exhibit some side-to-side motion as we play - we’d advise against attaching your entire percussion collection!

The omni-directional tilter works well in practice and the single wing-nut enables the cymbal to be moved into any position quickly. The mechanism is gear-less, although faint notches can be felt as adjustments are made. This would have been a welcome feature on the snare stand, which - despite being well made - is quite basic in its mechanics. The tilter allows no side-to-side motion, only the typical forward and back. Angle options are limited due to the chunky gears on the tilter, which means having to choose between having the snare angled forward or having it facing very slightly away. Certainly not the most versatile budget snare stand we’ve tested.

The hi-hat stand performs well and tension adjustments are not only quick and easy but work wonders when dialling in our preferred playing response. Unlike the bass pedals, they do not feature a solid baseplate, which means that the heel can raise off the ground slightly whilst digging hard into the toe-plate.

The bass drum pedals feel fantastic to play which, considering their price (less than £60 for the single and £145 for the double), is pleasantly surprising. The single pedal works perfectly out of the box and despite a heavy feel that complements our lead-footed heel up technique, fast doubles are also easily accessible. The included drum and Allen keys come clipped to the baseplate, so it’s convenient to make adjustments on the fly.

Although the double pedal uses a relatively narrow linkage to the slave pedal, it attaches easily and offers no less security than we’ve experienced with chunkier models. One thing we noticed on the double pedal is that the pedal itself isn’t completely square to the baseplate, so the chain isn’t completely vertical. A minor manufacturing fault perhaps? Thankfully, the pedal still responds well and doesn’t seem to be hugely affected.

Considering its appearance, it’s easy to forget that the Stagg 52 series comes with such a low price tag. Comparing it to higher-end products it does fall down in a few areas, however, compared to other hardware in its price bracket, it’s head and shoulders above.