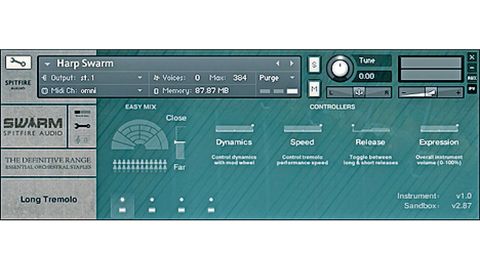 Another winner from Spitfire.

This is a collection of three libraries embracing the theme of massed tremolandi - the repetition of single notes played simultaneously on multiple instruments. Getting sections to play these repeating notes at different speeds results in a wash of sound, usable in a range of contexts. Split into Marimba, Harp and Mandolin sections, each has been recorded with multiple mics in the fantastic acoustic space of Air Studios.

The hall is used extensively to shape the sound of these libraries, by placing performers in different positions throughout the space and then using the varying mic configurations to capture the result to tape. The different mic recordings are individually mixable via the Kontakt interface, though pre-mixed, cut-down versions of each are also provided. There is also Spitfire’s usual array of customisation options regarding controller mapping and articulation selection.

With over 80GB samples (when uncompressed) this is a large collection devoted to what, on first inspection, appears to be a relatively narrow timbral niche. However, once you get playing it becomes apparent how all these instruments can be used in a whole host of ways - from Steve Reich minimalism, Bjork-style experimental Pop to leftfield Hip-Hop.