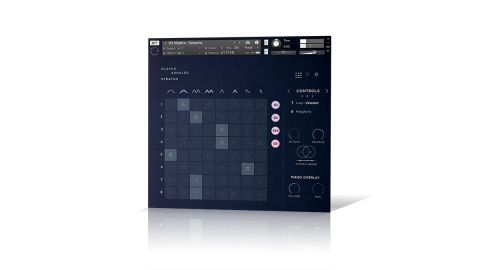 Replete with Ólafur Arnalds' signature piano textures and expansive ambience, the Stratus offers some stunning sounds and the means to explore them fully.

The pianos themselves – plus his Korg PS3100 and Roland Juno-60 synths – have been captured in 15GB of recorded performances, curated by the man himself.

The headline acts are the eight Stratus instruments – four piano-based, four synth-based – but you also get a collection of supplementary NKIs that put various heavily processed “Warped” versions of the main sounds at your fingertips in the simple and intuitive Mercury interface.

The Stratus engine centres on an 8x8 grid that enables assignment of particular loops and patterns to voices, so each consecutive held note, for example, triggers the selected pattern on the next row in the series (the complexity of the patterns in each column is indicated by icons at the top) at the played pitch.

• Native Instruments Una Corda
What seems like a simple, though highly detailed, sampled instrument turns out to be a considerably more complex and flexible package that is both musical instrument and sound design tool.

Each of the 64 ‘coordinates’ contains up to five pattern variations, and real-time movement through patterns and variations is a key feature, brilliantly facilitated with the ‘Evolve over time’ and ‘Randomise over time’ functions.

Sound shaping controls are basic – Attack, Release, the stereo imaging of the two pianos, and the volume and panning of an added single-note piano layer, for emphasis of the triggering notes – but a handful of effects prove useful, and the point here is the quality and tonality of the underlying recordings anyway, so that’s not an issue.

And while it could be described as a one-trick pony with a decidedly idiosyncratic sound, that trick is very cleverly and effectively implemented – and endless in its permutations – and the sounds it makes are truly sublime.

MusicRadar verdict: Replete with Ólafur Arnalds' signature piano textures and expansive ambience, the Stratus offers some stunning sounds and the means to explore them fully.

"The Korg patches feature a warm and pure bleep, which has clearly been heavily treated with tape. With their sharp attack and quick decay, they respond spectacularly to Stratus’s algorithmic patterns. The Roland patches are more like pads but still pulse and swell in an evocative and beautiful fashion."
MusicTech

"The producer also used his vintage analogue keyboards to create four synth matrices: three of them mirror the piano's approach, with the first benefiting from a pleasant, rounded warm tone and soft attack. The fourth, Synth Swarms is a showstopper — a serenely beautiful, ethereal pure-toned synth texture with a gently swelling sustain. Absolutely heavenly."
Sound On Sound