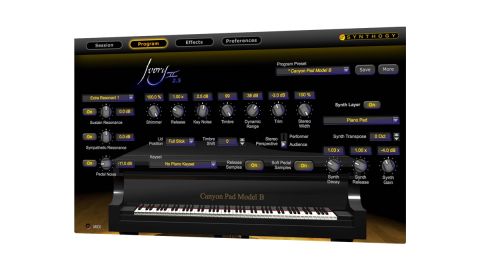 Another fine addition to the Ivory II line-up, but isn’t it about time that noughties-style GUI got a makeover?

Deviating from the concert grand tack, the latest in Synthogy’s series of massively multisampled pianos comprises the Steinway B and Bösendorfer 225 - thoroughbred 7' studio performers both.

Steinway invited the developers to its factory to choose the specific Model B used (which was then recorded at Power Station New England), while the 225 is resident at Firehouse Studios, Pasadena, where it’s been tickled by countless LA sessioneers. Together, the two libraries weigh in at an epic 112GB.

With the release of Studio Grands, the engine has been upgraded to v2.5, adding a handful of new features. The biggest is Shimmer, which enables tweaking of the decay rate of higher sustain harmonics, shortening and lengthening them for - in simple terms - a brighter or duller sound. Adjustable Half Pedaling controls, compatibility with MIDI CC88 High Resolution Velocity, MIDI controller support for the Mac standalone version, and iLok-free authorisation are less exciting but all welcome.

The Ivory II interface gives plenty of sound-shaping control, from editable resonance and lid position to key and pedal noise, dynamic range and stereo width, and there’s even a simple onboard synth should you, for some reason, fancy layering in a cheesy pad sound.

EQ, chorus and reverb are on tap in the Effects page, while the Session page grants access to a similarly comprehensive range of performance-related parameters, including pitching, velocity response and the aforementioned Half Pedaling controls.

Ivory II Studio Grands boasts four more velocity layers than previous entries in the series, for a total of 24, upping the playability and realism even further than before. Both pianos sound absolutely magnificent, and contrast well with each other - the raw Bosendorfer being the weightier of the two, the Steinway having the brighter sound.

Another fine addition to the Ivory II line-up, but isn’t it about time that noughties-style GUI got a makeover?