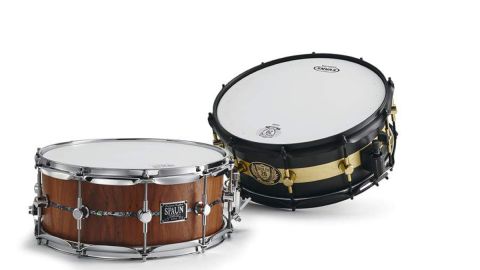 Despite their clear differences, both drums are built to an extremely high standard and represent very good value for money. Both are beautiful to look at and the brass anniversary snare is a cracking all-rounder.

This year celebrating 20 years of drum building, Spaun has produced a handful of special anniversary snares, including 100 percent mahogany and solid brass shells, the latter of which we have for review. We’re also taking a look at a natural walnut snare.

The 14"x5½" Brass II anniversary snare is constructed from 3mm rolled sheet brass, which has been powder-coated in Hot Rod Flat Black both inside and out. A band of matt-finish natural brass remains around the middle of the shell, created through a combination of grinding and heavy sanding. The drum features Spaun’s proprietary Solid Brass Resonator (SBR) dual lugs, which are also finished in brass.

The solid lugs are designed to be an extension of the drum shell, allowing for maximum resonance. Being secured to the shell with only one screw each also helps to minimise contact and improve resonance.

Our review model features matching black powder-coated triple-flanged hoops while the original version comes with brass coated hardware. Both models are available in 14"x5½" and 14"x6½" sizes. The Brass II also features black tension rods and a snare strainer, which help to accentuate the central brass band. The rounded bearing edges are the same width as the 3mm shell, which makes for a very fine point of contact with the heads.

The resonant side is fitted with a Spaun branded clear reso while the batter side has a special Evans HD Dry coated head, which also sports Spaun’s 20th anniversary logo, matching the graphics on the drum’s metal badge.

The 14"x6" Natural Walnut snare has a 9-ply shell, made up of inner and outer vertical walnut layers and a maple core. It features a thin abalone inlay, which combines mesmerising greens, purples and blacks to create a unique look.

The dark vertical walnut grain is finished with a satin clear coat and combines with the inlay for a classy aesthetic. Inspecting the double 45-degree bearing edges, it’s possible to see the contrast of the pale maple sandwiched between the darker walnut plies. This not only creates an interesting visual but also reminds us that this snare is utilising the tonal versatility of maple. The walnut snare also features dual SBR lugs, cast snare strainer and triple-flanged hoops, all of which are finished in chrome.

Ticking all the usual boxes for a brass-shelled drum, the anniversary snare is decidedly hefty (weighing in at around 15lbs) and makes a glorious racket. Set to a medium tuning out of the box it has the trademark metallic hum that one might expect from the thick brass shell; it’s especially suited to barking its way through heavy rock and metal. The wires are sensitive enough to balance the overtones with a meaty crack, which makes for a more balanced response.

Tuned up high the drum becomes extremely aggressive with a rapid attack. It’s worth mentioning that we actually tensioned the resonant head so tight that we managed to tear it. The edges are well finished, but the narrow point of contact managed to effectively puncture the thin Mylar head. Not a deal breaker by any means, but worth noting that a little care is needed when tuning.

A little extra dampening goes a surprisingly long way in killing off most of the prominent overtones and mellows the overall tone. The thicker Evans HD Dry head minimises the need for further dampening and results in a solid feel under stick. Tuned way down low the drum works surprisingly well for a super-wide backbeat, thumping its way through classic soul and funk numbers.

The walnut snare also lends itself to low tunings but is a little trickier to wrangle than its anniversary counterpart. Pitching up to higher registers the snare isn’t so well balanced and lacks attack. Even cranked tight the drum is lacking somewhat and doesn’t quite pack the punch we were expecting.

After some time fiddling with the tuning of both the resonant and batter heads, we find a happy medium where the snares are responsive and the drum cuts a little more. Best suited to low-to-medium tunings, the walnut drum would likely be more at home in the studio rather than for live use. Given more time it would be interesting to experiment with different head combinations to explore the possibilities of the walnut and maple shell.

With two very different instruments come two completely different characteristics; both are absolutely gorgeous to look at and they are both very reasonably priced for hand-build custom drums, but for our money the 20th anniversary Brass II takes the winning medal here.