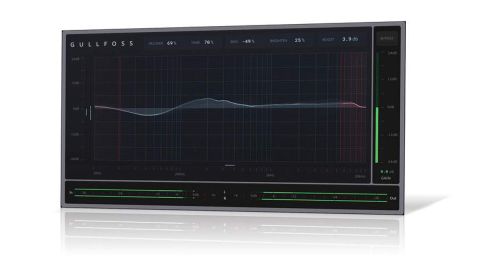 Feeling like a glimpse into the future of mixing and mastering, this remarkable, super-smart automatic EQ plugin is a potential game changer.

Named after a waterfall in Iceland, Gullfoss (‘golden falls’) is the debut plugin (VST/AU/ AAX) from new development house Soundtheory.

A fully automatic EQ for use on tracks, buses and mixes, it claims to be able to do the hard work for you, using a “highly advanced model of human auditory perception” that enables it to “understand what your signal really sounds like and how it can be improved.”

What this means in practical terms, is that Gullfoss intelligently analyses the input signal in real time and adjusts the frequency response of its filters 100 times a second to achieve an objectively balanced sound without introducing any artefacts.

We can hear the low hum of scepticism from here, but rest assured - as hyperbolic as it might sound, Gullfoss will make a believer of even the most hardened techno-cynic.

On first launch, Gullfoss’ total absence of frequency selection and gain controls is mildly unnerving. Of course, it doesn’t need them, because all of that stuff is done under the hood. Instead, there are just five adjustable controls at the top of the interface, plus the range limiters in the central display (see Sight of sound).

The Tame and Recover controls govern the balance between the “dominant” (masking) and “dominated” (masked) elements of the signal.

Raising Tame increasingly pulls back the dominant parts, while Recover emphasises the dominated ones, the idea being to bring out desirable components of the mix or instrument that are getting overwhelmed, in the interest of overall clarity.

Both range from 0-200%, but you won’t generally want to go over - or even near! - 100%. For signal elements that are ambiguous in their dominant/dominated status, the Bias control can be used to tilt the process in either direction - towards Tame or Recover - whenever they arise.

The main graphical display shows the frequency response in real time, while meters to the left and below reveal how much the Tame, Recover, Bias and Brighten parameters are affecting the signal. Watching the response curve and meters dance around while playing with the controls is hugely informative, revealing all the frequencies being rebalanced by Gullfoss, and the direction that the dominant/dominated balancing act is taking from moment to moment. In this regard, the plugin can also be deployed as a sort of analyser, perhaps guiding the use of an analogue character EQ.

Also in the main display are two vertical range limiters (the red lines). These define the boundaries of the frequency range processed by the plugin. Drag either or both of them inwards to target a particular region in the mix, instrument or bus being EQed, and move one past the other to exclude the range between them from processing.

Of course, no matter how smart Gullfoss is in terms of objective improvement, there’s no accounting for taste and the particulars of given genre. While the plugin targets the optimal balance of frequencies and sonic elements within the signal, the bipolar Brighten and Boost controls enable tilting and tweaking of that balance.

Like Bias, Brighten changes the relationship between dominant and dominated, this time having an effect similar to a brightening/darkening tilt EQ; while Boost applies a lift to the low end and cuts the mids when increased, and vice versa when reduced.

Gullfoss’ controls, although few in number, aren’t exactly intuitive, with no explanation given as to the audiological proclivities of the virtual brain cycling away in the background.

Nonetheless, as you get used to its behaviour, and develop an appreciation of its tolerances, it soon becomes apparent that this thing really does work, doing an often incredible job of balancing instruments and mixes with total transparency.

Care needs to be taken in its application, of course, and you still need to keep your ears fully engaged, as misjudged tweaks can yield strange results; but, no doubt about it, Gullfoss absolutely delivers on its futuristic promise. It’s a true next-gen equaliser that you’ll quickly come to rely on.