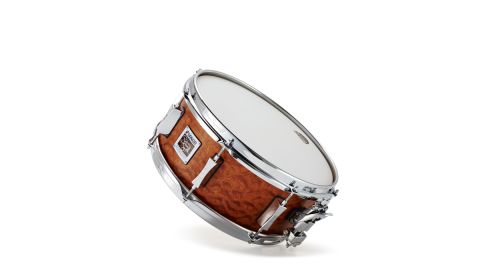 The price is eye-watering, but this is a limited collector’s edition, a vintage-tinged drum that acknowledges the steadfast 40 years’ support from one of the world’s most consistently great drummers.

After having seen Bernard Purdie playing Sonor in 1977, Steve Smith headed out and bought himself an orange Sonor kit with twin 24" bass drums.

He’s remained committed to the brand and, in acknowledgment of this loyalty, Sonor commemorates Steve’s 40th year with this signature snare with a limited edition of 77.

Safely cosseted in a formidable hardcase, the drum arrives complete with Vic Firth Anniversary drumsticks and a black wood (10"x7½") box containing an authentication certificate and golden drum key. A special commemorative badge completes the drum’s exclusive look. You may have noticed the somewhat inflated price, which reflects the special, limited-edition status.

Harking back to 1977 there’s a strong vintage slant to the drum, with rounded bearing edges and eight 1970s Phonic-style ‘bow-tie’ lugs - the same lugs as on Steve’s Signature steel snare drum.

Also in classic Sonor style, the 14"x5¾" shell is crafted from nine plies of German beech wood, just 6mm thick. This is in turn bound by a highly figured semi-gloss veneer of Mountain Burl, both outside and inside. This is an ALPI artificial eco-responsible designer finish, similar to Sonor’s other SQ2 finishes, such as Chocolate Burl.

Close inspection reveals the shell is nigh-on flawless, although it does vary slightly in roundness. Continuing the period vibe, the engraved SuperProfil chromed-steel hoops have their stick-saving top flange folded inwards. The major concession to the modern era is the redoubtable Dual Glide strainer, butt and 24-strand Steel Sound wires.

Beech is an underused wood and yet always impresses with its rich sound straddling the more familiar taut birch and open maple. Beech was a 1970s Sonor staple and features on the recently-reissued Vintage series.

Contrasting with Smith’s steel signature snare, here we have a mellower, darker and more controlled character deriving from the rounded edges and slightly increased depth of the thin beech shell. Special 24-strand wires give a thick snare-y crunch to the backbeat.

Steve tells us exclusively, “I loved the sound of the Vintage snare drum that Sonor released a couple of years ago and I wanted something close to that. The rounded edges help give the snare a darker sound. Also, with eight lugs I hear more low-end because the heads keep an open feel.”