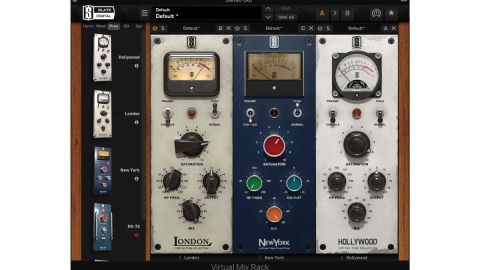 In terms of adjustable parameters, there’s very little to them; but once you’ve heard Virtual Tube Collection’s three modules in action, you may not want to mix without them in your Virtual Mix Rack again.

The latest addition to Slate Digital’s insanely comprehensive subscription-only Everything Bundle (although you can also buy it outright, of course) is a trio of classic tube circuit emulations, each featuring separate algorithms for track and mix bus deployment, and all loading in the free Virtual Mix Rack ‘container’ plugin (VST/AU/AAX).

The exact hardware they model isn’t named, but Virtual Tube Collection’s three modules are called London, New York and Hollywood, loosely describing the origins of the gear and saturation styles they serve up.

London is “inspired by some vintage tube circuits originating in Europe”, and designed to deliver low/low-mid weight, top-end smoothness and general fatness across the board. The analogue valve of the New York module is hybridised with the integration of “some New York solid-state discrete circuits”, the upshot being greater midrange push and aggression, and overall punch. Finally, Hollywood is touted as the most colourful in the set, adding “air, depth, excitement and some really big bottom”.

Three of a kind

Each module has its own bespoke fascia, but all of them share the same straightforward set of controls.

At the top, the VU meter is calibrated - as it is in all VMR modules - to -18dBFS by default, adjustable to anywhere between -6 and -24dBFS by turning the screw head underneath. Below that, the Clipping Bulb glows to indicate the amount of saturation happening.

The switches on either side of the Bulb effectively determine the style and intensity of the saturation circuit. The Mode switch flips between the aforementioned Preamp and Console algorithms, Preamp being the more sensitive and brash of the two, intended for use on individual tracks, and Console emulating a summing circuit with its own non-linear characteristics, to be strapped over group and mix buses.

The Color switch, meanwhile, kicks the saturation circuit into, er, overdrive, when set to Push, exaggerating the specific non- linearities of each model for an overall distortion boost. You might assume that the Push option is meant for use in Preamp mode, and while that’s certainly true for the most part, it’s worth trying in Console mode on the mix bus, too, as it alters the flavour of saturation, not just the amount.

Virtual Tube Collection’s three modules can only be used within Slate Digital’s Virtual Mix Rack plugin, which - fortunately - is a great piece of software in itself. Graphically styled on the API 500 ‘lunchbox’ format, VMR is simply a shell plugin into which Slate’s various analogue-emulating signal processing modules are loaded, including the two EQs and two compressors that come with it, those of the Virtual Console and Virtual Preamp Collections, the Air and Earth EQs, the FG-Bomber “Dynamic Impact Enhancer” and now, VTC. Up to eight modules can be dragged into the ‘rack’ from a scrolling side panel, and the input signal flows through them in series from left to right. The advantage of VMR is that it enables you to build your own high-quality custom channel strips and chains, and save them out as complete presets. The disadvantage of it - or rather, of having to use it to get access to VTC - is that it’s overkill when all you want to do is fire up a preamp. So, although VMR is never a pain to deal with in any sense, we’d nonetheless appreciate the option to load modules without it.

With the switches set, operation of VTC largely boils down to manipulation of the Saturation and wet/dry Mix knobs. What happens when the Saturation is increased depends on which mode you’re in. In Preamp mode, it overdrives the preamp, dialling in analogue warmth and colouration up to around 12-2 o’clock, then overt crunch and soft clipping distortion beyond that.

In Console mode, it models the effect of overdriving individual channels into the mix bus, resulting in the far more subtle ‘gluing’ vibe of an analogue summing bus. The Mix control is then used to tweak the distortion by balancing it against the dry signal - it’s of primary relevance to Preamp mode, but not entirely without its uses in Console mode.

The Hi Freq knob sets the cutoff frequency of a high-pass filter, from Off to 250Hz, aiding in the removal of low-frequency noise, should it be required. Last and, indeed, least, the Output knob is VTC’s final-stage gain control.

As you’ll have surmised, VTC is nothing if not easy to use, clearly being all about the sound that Slate have designed it to impart, rather than scientific under-the-hood tweaking of tube parameters and so on. Each module has its own particular sonic character, defined by its frequency response, harmonic ordering/ distribution and non-linearities.

As suggested by Slate, London is indeed the fattest, warmest and most obviously analogue-sounding of the three, best suited to drum buses, bass channels and vocals. New York is considerably pokier and comes across as more upfront through its midrange emphasis, often requiring careful tweaking of wet/dry Mix to find the sweet spot.

The most versatile, though - and our favourite, were we forced to choose one - is Hollywood, which works wonders at the top and bottom, exciting and enhancing anything you care to throw at it.

Put it on the Slate

All three members of the Virtual Tube Collection sound unarguably fabulous, bringing thoroughly convincing tube saturation - to whatever degree you need it - to tracks, buses and mixes of all kinds.

As with real analogue preamps and summing buses, the effect they have on the input signal can be almost magical: that palpable coalescence of the mix or thickening up of its individual elements; the lifting of highs and lows; the addition of bite and presence to vocals and instrumentation...

While there are plugins out there that let you get deeper into the technical specifics of valve saturation, we’ve not heard many that match VTC for quality and authenticity; and, frankly, its simplicity is a huge part of the sell. Wonderful, wonderful stuff.