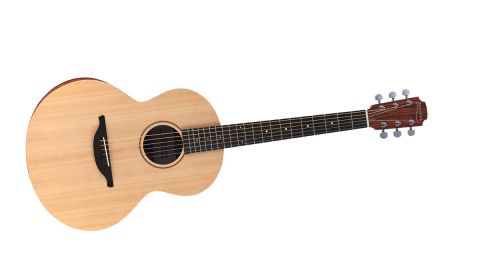 A bold new venture with a sonic performance to match, particularly when plugged in.

Back at the end of January, TG was huddled together outside the Anaheim Convention centre at NAMM lamenting the lack of any surprise big product launches at the show.

A couple of hours later a whopper of a hoodwink duly landed in the form of Ed Sheeran and a range of eight models courtesy of a collaboration with Lowden Guitars.

Whether you care for his music or not, Ed is the biggest guitar player on the planet right now in terms of recognition and commercial success. So this was big news. The new ‘Sheeran By Lowden’ name on the headstock was also a surprise and a new spin on the idea of signature guitars. Now they’re ready for their full curtain call.

All this might not have been as big a surprise to anyone who had been watching Sheeran’s stage performances in the preceding year. His previously ubiquitous Little Martins (the company’s biggest selling models for some time) had been phased out in favour of Lowden guitars. He’d already been using the Northern Irish maker’s instruments for some time in the studio, forming a friendship with the luthier along the way.

Even so, nobody expected a range of eight models to land encompassing electro and cutaway options in two body sizes. We’ve got one of them here, and there’s a lot to talk about…

Like every one of the Sheeran By Lowden models, this guitar is made in County Down, Ireland in a new facility. A huge undertaking in production and reflection of the commitment and care the maker and artist clearly have to quality control here. It shows in tidy builds with unfussy aesthetics - ‘bare’ by Lowden’s own admission with no binding, abalone or gloss here.

With the LR Baggs VTC systems on this guitar it’s unsurprising to see the price above the £650 street price Sheeran’s ‘Divide’ edition Little Martin electros fetch, bringing this guitar into a higher price territory than even some of Taylor’s GS Mini-e range.

The S02 unsurprisingly brings plenty of bottom-end to the party with its 105mm body depth, and something we’ve not heard from Sheeran’s live sound before. But those clear, resonant highs offer a more detailed separation and an inspiring strumming experience that makes it a great guitar for those who want a more rhythmic muse. It’s certainly an acoustic that questions the validity of the ‘solid is better’ claim against laminate.

Plugging in with an electro often equates to compromise but here it feels less. The quality of the Baggs VTC is certainly aided by the inherent sustain in the higher-mids. The S02’s highs need the tone control’s treble roll off, though we couldn’t help wishing for a low-end shaping bass control on the guitar, too.

It’s hard not to make comparisons with Sheeran’s previous Martin signatures, and on price this comes in higher. But it is also among the most affordable Lowden guitars to date. The assured UK build, performance and even the durable high-quality gig bag here adds up to a higher quality experience certainly, and the top-notch Baggs system here is above much of the competition.

But we’re left with two fundamental questions: can the price point attract Sheeran’s younger fanbase, and moreover, will the prominent Sheeran name on the headstock deter players who aren’t his fans?

Time will tell. What we do know is this is a surprising and bold new chapter for Sheeran and Lowden, bringing the luthier’s superlative design skills to a new market. One we can confidently say it shines in.