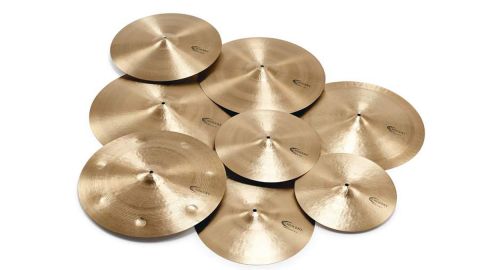 A high-quality collection of thoughtfully designed signature cymbals, Stanton Moore’s Crescent set has real character and personality yet is capable of enhancing a wide range of musical styles.

Stanton’s previous self-designed set was made by Turkish company Bosphorus. This arrangement ran its course and, together with fellow drummers Jeff Hamilton, Michael Vosbein and Bill Norman, the standalone company Crescent was formed to continue manufacturing cymbals in Istanbul. Then in 2015 Sabian’s Andy Zildjian offered to buy out Crescent and since then Crescent cymbals have emerged from the renowned Sabian Vault in Canada. Stanton’s updated set benefits from Sabian’s tight production values, greater marketing clout and distribution.

The set consists of paired 14" and 15" Fat Hats; 16" and 18" Smash Crashes; 20" Pang Thang; 20" Trash Crash, plus 20" and 22" Wide Rides. These denominations are familiar from the previous set, but the cymbals now utilise Sabian’s expertise. Stanton explains: “Sabian brought over Charlie Brown, the master cymbalsmith. I watched him hammer and I said, ‘Mr Brown, no offence but you are too good! Can you figure out how to build some imperfections and inconsistencies into the process?’”

Eventually, this involved using multiple hammers and even experimenting with ‘miss hits’ and employing less-experienced hand-hammerers. The outcome is, as Stanton puts it: “more consistent than we were getting, but not too consistent where the mystery has been totally taken out”.

The most unusual cymbal is the 20" Trash Crash with seven large craters multi-punched into its surface. Inspiration for this goes way back to an unexpected source, a cheap cymbal Stanton discovered at school. “I found an old (British Premier) 20" Zyn in my high school band room. My band director, Marty Hurley, sold it me for 15 bucks!”

With three rivets in it Stanton used the Zyn as a ride. “Then once I started designing my own series I wanted a cymbal like that. They sent me prototypes but they were not trashy enough, so I said, ‘We need to put seven ‘potholes’ in it.’ And (eventually) it came back exactly as I wanted. Those potholes create distortion that break up the soundwaves.”

As for the 20" Pang Thang: “I always loved a Pang that Johnny Vidacovich had. It’s not a traditional ride sound, it’s not a Swish Knocker and not a China either. It’s different.”

The rest of the set are relatively classic looking. They all have broad, part-lathed undersides though. Stanton explains, “When you lathe a cymbal you brighten it up, so I wanted the cymbals to look traditional on top but underneath leave some of that darkness and focus.”

While lauded for New Orleans funk, Stanton also has a jazz trio and has recorded heavy metal with Corrosion Of Conformity, using the same cymbal set.  A wide range, hence the designation ‘Wide’ Ride. Both rides are warm, dark and commanding with a hint of trashiness. The 22" especially has lots of spread and a comfortingly deep timbre. There’s a jump between body and bell, the latter leaping out, though not jarring. It offers a separate voice, neat and fresh. Funk-Latin choruses beckon.

The 20" is higher pitched overall and clangily sharp in comparison. There’s a perkier vibe, coupled with a correspondingly spry bell, a tinkly presence over a fairly dry base. With their thinnish top cymbals the 14" and 15" Fat Hats have a supple, lush sound, hence the Fat designation. Closed they deliver a broad, mellifluous pulse - clicky, yet solid and velvety. The pedalled ‘chick’ is also rich and dense. Opened the hats are not so much raspy as thick and shoopy.

Now for the exotics. Stanton’s style is raw and energetic, his sound dark and colourful. But, he explains, maintaining the flow is paramount. “I didn’t want traditional crashes that jump out and cut through the music, I wanted cymbals that would blend.” The 20" Pang Thang is really dusky. The upturned brim ensures the crash cuts short quickly - a sharp smash of a smooth dustbin lid. Riding on the curved body has a hard, bright clarity. Compared with the Wide Rides the Pang is in your face, seeming to say, ‘Cop this! Take that!’ Not harsh, but demanding attention.

The 20" Trash Crash is spanglier: still dusky, but with bite. Crashing is more Turkish harem, exotic, mysterious, plus there’s more sizzle and the fade lasts a little longer. Riding is perhaps not the obvious option.  After all this, the two mid-sized Smash Crashes seem almost an after-thought. They have a sweet, lucid tone, crash quickly with a tasty ‘bish’, being thin, decaying smartly. The underside broad lathing dries and focuses the response. Great for recording, they make a fetching contrast with the Pang and Trash, providing clean, civilised punctuation between the grubbier racket of the exotics.