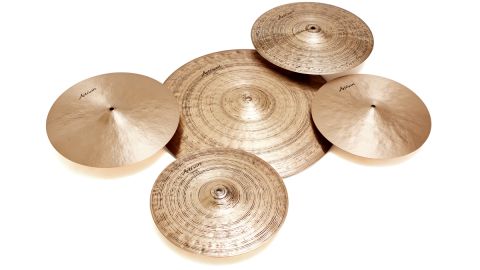 Such exquisite cymbals do not come cheap. The Elite ride is dark, dry and beautifully balanced. All the hats are smooth and subtle, the polar opposite of brash and shrill.

In 2004, Sabian introduced the Vault tag, a collection of special, individual cymbals from the Canadian company’s experimental lab where its master cymbalsmiths try out new ideas.

The following year saw the Vault Artisan ride, Sabian’s “ultimate traditional cymbal”. Fast forward to 2017 and Vault as a series name has been dropped, although individual Vault Collection cymbals are re-positioned within Sabian’s familiar AAX, HHX, AA and HH lines.

Artisan is going strong though, as witnessed by these new additions under the banners of Elite and Light. Here we have a 22" Elite ride with 14" and 16" Elite hats and 14" and 15" Light hats. There are also Brilliant versions of the Light hats, not reviewed today.

Artisan cymbals are at the pinnacle of Sabian’s craft, some of the most expensive cymbals you can buy. The reason for the latter is simply that Sabian puts an inordinate amount of work into their production, claiming that the new Elites employ “elements of cymbal-making even the most traditional cymbal companies have abandoned”.

Each Artisan cymbal starts out as an individually cast ingot of B20 bronze which includes traces of silver. The ingot is fed through a rolling oven a dozen times, while repeatedly rotated and is hand-hammered between 2,000 and 4,000 times by Sabian’s ablest craftsmen.

The two new Light hi-hats are an alternative to the already available standard Artisan hats. They have a classic look with a regular finish, although you can buy them polished to Brilliant if you prefer. The new Elites have a more distinctive look, a natural finish with top-and-bottom lathing smudged with black traces of tin oxide. They are also distinguished by their low profile including gently rising bells.

The 22" Elite ride has a wonderful extra-dark stick sound. Played in the middle of the bow you’d almost think it was 24" or 26" rather than 22", it is so broadly sonorous. There’s a hint of gong-like fruitiness beneath its slightly trashy tone.

Articulation is precise despite the cushioned attack, while the complex, evocative tone  is dry, never muddy. Crash-riding produces a satisfying whoosh not a hard smash, followed by a tightly controlled decay.

The bell is at one with the body of the cymbal rather than contrasting jarringly. You may want sharp contrast in some styles, but here the bell melts into the overall picture, emerging like the wistful clang of a distant train bell in an old movie.

So you ride away just catching the bell here and there for a subtle lift, adding a sparkle of contrasting texture to the groove - a complex Latin or African-tinged ride pattern perhaps.

The 16" Elite hats are commanding, they feel big but don’t get in the way sonically. Although deep they are expressive and as they’re quite light there’s little feeling of hard work, of a lumbering lag in opening and closing. So despite their somewhat alien size they don’t slow you down much at all.

Bigger, darker hats that pump away below the lead instruments and vocals are catching on it seems. They actually make sense, clearing some frequency space in the mix, pushing from below rather than dancing on top like 12" or 13" hats, say. You get this effect with the one inch smaller 15" Light hats too.

Both 14" and 15" Light hats are requested alternatives to the already available standard-weight Artisan hats. They team a lightweight, crashy top cymbal with a medium weight bottom and thus make a lighter-weight pairing, suggesting lower volume and duskier tone. Since the sort of drummers in the market for Artisan hats are more likely to be working in dynamically sensitive musical settings this again makes sense.

Both pairs are extremely giving to the stick tip. This may be too sensitive for many, with just not enough gusto. The 14" pedalled sound is the most refined, featherweight marker, but open the cymbals up and shoulder them and you’re rewarded with the sweetest, purest sound. Still relatively quiet, but elegantly toned. Placing the 14" Elites and 14" Lights on two hi-hat stands next to one another confirms that the Lights are, well, lighter. Fractionally softer and deeper. The Elites have the edge - relatively brighter and sharper, though still remarkably subtle.

With the 14" Elite hats the tiniest tap elicits a full clear tone. When you pedal ‘2’ and ‘4’ while riding the 22" everything is supple, dark and calm. While they’ll never be the loudest, their quality ensures their versatility.