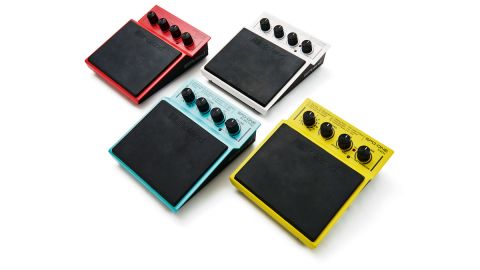 Roland has clearly looked at the market and delivered something that is missing. Will TM-2 or SPD-SX users be selling up? Probably not, but we can definitely see the Wav pad joining proceedings for many drummers as a standalone solution to running a click.

The first three share common features and functionality, while the SPD::ONE Wav - aimed at those wishing to incorporate their own backing tracks and click - works slightly differently (more about that later). So, with the first models in Europe landing at our Funky Bunker days after they were announced, we’re feeling the need for SPD.

One thing you may notice when you first take a look at the SPD::ONE pads is their resemblance to Roland’s iconic Boss pedal line-up - the brightly-coloured, all-metal chassis and font styling wouldn’t look out of place on your guitar player’s pedalboard.

Interestingly enough, these pads are designed to be played with a stick, hand or even tapped with your foot, and as such Roland isn’t just aiming these at drummers - for us, though, it means they can be placed anywhere within your kit.

If you do want to mount them (which most of us will) you can use the included hardware which clamps each pad to a tom holder, L-rod or cowbell post up to 12.7mm in diameter. This is good news for many, however our Pearl Reference holders didn’t stand a chance, so we fashioned a mounting solution from our V-Drums kit and a spare multi-clamp in order to use the Electro pad on a gig.

With mounting sorted, let’s talk about sounds. We’re going to take the fact that Roland has covered every base here (and it has) as read. Each module is loaded with useable, model-appropriate sounds spanning classic to contemporary, and they’re all sampled with great detail and quality.

As mentioned, the Electro, Kick and Percussion pads feature a similar layout and feature set, and it’s all very self-explanatory. From left to right you have a 12-position rotary control for selecting your sounds, tuning control for altering the pitch of the sample, a dual effects control (you can select one of two) and your master volume.

Now, the sound selector actually has two layers to it, so out of the box you actually have two sounds per position at your disposal by pressing the instrument variation switch. When you do, the LED next to it blinks once or twice to indicate which layer you have selected. Handy.

As well as this, each of these three pads can load a custom sample into the twelfth position. You simply select the User slot, connect to your computer via USB, press the variation button and drag a .wav file into the SPD::ONE (which appears as a flash drive). Once you do, you can effect it in the same way as the on-board sounds.

Talking of which, the tuning control is great for tailoring the on-board sounds more closely to your song, meaning you can get a lot of mileage out of a fairly small selection. The effects are also useful - the Electro and Percussion feature reverb and delay, while the Kick has reverb and distortion. You select which effect you want to apply by turning the control left or right.

The further you turn it, the more intense the effect becomes (in the case of delay, it changes the delay time). They’re great fun on-the-fly, however we did find the reverb to be a bit noisy at more intense settings. As with the tuning setting, your effects are global, so if you change sounds, you’ll need to reset the tuning and effects settings if they aren’t needed.

So far, we haven’t mentioned the SPD::ONE Wav pad. That’s because it’s quite different to the others in the range. It’s designed as a sample playback solution for drummers who want to trigger sounds, phrases and entire backing tracks live, along with a click track.

So, by connecting it to a computer over USB, you have access to 12 folders (one for every switch position). Each folder contains a Master and Click folder. You place the click-less backing track, one-shot sample or phrase (the playback is determined by the file name) audio file in the master, and the corresponding (and synchronised) click track in the click folder.

The SPD::ONE Wav then outputs the ‘master’ sounds to the main output as well as your headphones, while the ‘click’ folder sounds only go to your cans. Using the mix control, you can then balance the track and click levels in your ears. It’s simple and really cleverly done in a way that is sure to make using a click in a live situation a doddle.

We do have one small gripe though: the inclusion of a line-in would have allowed us to incorporate a regular monitor feed to hear the rest of the band, without having to start using an external mixer.