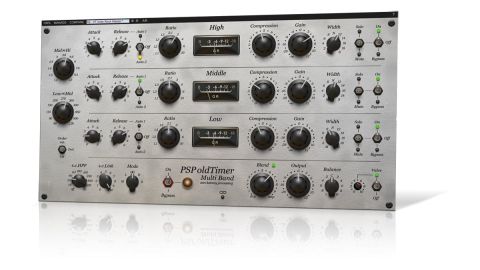 It was followed up in 2011 by the more versatile PSP oldTimer ME, and now, almost a decade later, there’s an, er, new oldTimer on the block in the shape of the MB edition (VST/AU/AAX/RTAS).

This is, essentially, a multiband PSP oldTimer ME, racking up three frequency-limited instances of the compressor for more complex dynamics processing tasks than ME’s single band might be able to handle.

Width balances the mid and side signals from 100% mid (ie, mono) fully counterclockwise, through 50/50 at the centre, to 200% side clockwise; and Auto Release mode 2 supplements the original PSP oldTimer Auto setting with an analogue-modelled alternative.

The Solo/Mute switches are useful for isolating individual bands or removing them from the output for auditioning purposes, of course.

The global section at the bottom is where you blend the overall dry/wet mix, pan the output, dial in valve saturation (a new algorithm with a continuous, rather than stepped, pot), switch between stereo, left, right, mid and side channel processing (two instances are required for midside and independent left-right operation), and dial in the high-pass sidechain filter (up to 1kHz). The last adds in a channel link control, but, sadly there’s still no external sidechain input.

The two left-most knobs control the band crossover frequencies. The Low/Middle split ranges from 60Hz to 1.2kHz, Middle/High sits anywhere between 1.2 and 12kHz, and three roll-off slopes are available – 6, 12 and 24dB/octave.

New-school producers might fret about the lack of an interactive spectrum display for adjusting crossover frequencies, but there’s a lot to be said for using knobs to set your band splits – it forces you to trust what your ears tell you, not your eyes. We fully approve.

As expected, PSP oldTimer MB sounds every bit Release mode 2 aside) unchanged in terms of response, with the same dbx-style ‘over easy’ transfer characteristics up to 1.5:1, and a soft knee at higher ratios (up to 10:1).

The multiband setup obviously makes it a lot more lexible on drums, group channels and the master bus, however, and although you could replicate the functionality by racking up three filtered PSP oldTimer MEs in your DAW, MB’s crossovers play a part in the sound, and the convenience of the thing is undeniable.

Powerful, versatile and palpably ‘vintage’, PSP oldTimer MB scales up the established PSP oldTimer architecture without compromising its sound or spirit in the process.