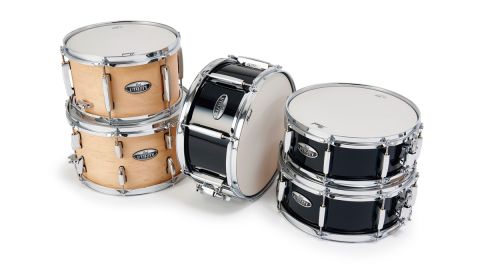 These no-frills snare drums, in a selection of popular sizes, give you multiple options to add variety to your set-up without over-stretching your pocket. In the Pearl hierarchy Modern Utility sits above Export and Effects drums (Firecracker, Piccolo, etc) price-wise, and below the Sensitones.

Where Pearl’s long-standing Sensitone ranges offer exceptional flexibility in wood and metal shell drums for the upper-middle bracket, these Utility snares neatly plug a gap in the lower-priced market. Sensitones generally have slightly superior hardware and shell specs. And they boast 10 lugs where Utilities have eight. The Modern Utility range adds yet further options, but are accessible to those on a tighter budget.

As likely add-ons the drums are offered in just two relatively neutral lacquer finishes: Black Ice or Matte Natural. The black is so mirror-smooth it has the slightly disconcerting look of plastic. A shame as it’s a class finish. The natural drums display the wood’s pale buff colour, although the Asian maple lacks a standout grain.

The 8" deep drum has 16 single-ended Classic CL bridge lugs while the four other drums have double-ended CL lugs. There are eight on the 14" and 13" drums and six on the 12" and they vary in length to correspond with shell depth, which is quite an investment on Pearl’s behalf. The two shallower drums have 6cm lug cases while the two deeper drums have 9.5cm cases, thus avoiding over-long tension bolts.

Hoops are 1.6mm chromed steel triple-flanged and the throw-off is Pearl’s utilitarian SR-700, accompanied by a cast butt end. It’s basic but it works, as do the steel snare wires, with 16 strands on the 12" and 13" drums and 20 strands on the 14" drums.

With the minimal lug count and extra-thin Asian maple shells the drums are lightweight. Many vintage drums are light like this and it’s not a bad thing so long as the drums are strongly constructed, which Pearl is at pains to point out they are. Being so thin, the shells are more liable to distort, and viewed from directly above we noticed a few areas where the curvature of the steel hoops and the wood shells deviate by a 1/16" or two. No big deal so long as the maple is resilient.

There’s a vintage snare residing on our home kit, with an excessively open, ringy sound. So, swapping it for the first Utility model - the standard 14"x51⁄2" - the difference is really marked. The Pearl has a taut, less rangey sound, almost boxy. It only takes a few minutes to get used to it though and it occurs to me that this is a typically modern sound. Needing minimal damping, if any, as the rim shots don’t ring madly, it’s easily manageable.

Loosening the snare wires a bit the drum breathes more easily and the sound becomes more expansive and enjoyable as the batter head plays in. The deeply-cut snare beds help.

This leads to the other standard 14"ers - the 61⁄2" and 8". The former is more of the same, an option if you want power with marginally less edge. The 8" is more specialist and a bit of a bargain with its 16 lugs and deep shell. Yet because of the generally compact nature of the Utility series the 8" doesn’t feel overly deep.

Eight-inch drums don’t have the snappy close snariness of shallow drums, so they can sound more like a tom, particularly from out front or when miked in a concert hall. They’re fat but rarely cut though like a shallow snare. This one doesn’t seem thus afflicted though - it’s crisp and it actually sounds quite toppy from behind the kit. Given that it also has a fat body tone, it should be useable in varied musical contexts, not just the clichéd 1980s big-hair rock ballad.

The 13"x5" may just be our favourite. It benefits from the series’ characteristic tight punchiness with snappy beats that are not thin and one-dimensional, but have substance thanks to the 5" depth. So that slightly reduced 13" width gives an extra brightness without getting flabby. It’s not too narrow for cross-sticks either.

By the time we reach the 12"x7" we’re more into effects territory. Its tom-like dimension renders it naturally more tubby. As a second snare you can have real fun exploring its clear tonal contrast with your standard 14" everyday snare.