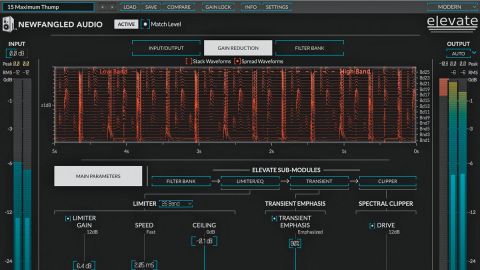 EQuivocate is awesome, but Elevate is the real story - it’s a dynamics sculpting beast.

Both are based on Newfangled’s “auditory filter bank”, which divides the input signal up into 26 bands designed to model the frequency response of the human ear - see Mel’s myth. You may have already picked EQuivocate up when it was made available for free briefly last year, in which case (and, indeed, if you bought it) you can avail yourself of a $99 upgrade to the full bundle.

EQuivocate is the most straightforward of the two plugins, realising the auditory filter bank concept as a 26-band linear phase EQ. Simply select the number of bands you want to work with, from 1 to 26, and apply up to +/-12dB of cut or boost to each one using the sliders. Dragging the centre frequency of a band left or right displaces any other bands it comes into contact with, stretching and compressing the two sides of the filter’s triangular response ‘curve’, as visualised in the filter display at the bottom.

When any frequency range changes are made, the plugin switches to Custom mode, indicating that the Mel scale is no longer being used. Solo buttons on each band enable isolation of chosen frequencies, and the Match EQ function imposes the frequency curve of a live sidechain input on the source signal to a user-specified depth.

The notion of auditory masking phenomena first emerged in 1933, when Bell Labs’ Harvey Fletcher demonstrated that for humans to discern two simultaneously audible frequencies, they have to be a certain distance apart. That distance depends on the paired frequencies in question, but for practical purposes, the 0-20kHz range can be divided up into 26 very specific bands, within each of which we can only hear one sound at a time. If you play the centre frequency of every band in sequence, a listener will perceive them as equidistant from each other. This series was eventually formalised as the Mel (‘melodic’) scale.

By applying the Mel scale to the field of audio signal processing, theoretically, you’re playing perfectly into the, er, hands of the human ear, eliminating what it might hear as clutter - even if only at a subconscious level - and slotting everything into its comfort zones. In EQuivocate and Elevate, the Mel scale is adhered to by having every one of their tightly defined bands operating entirely independently of those on either side. Newfangled describe it as “each slider directly tickling a different section of your inner ear”. It’s a novel, ingenious approach that - perhaps unexpectedly - works brilliantly in the real world.

In Mel mode, EQuivocate is undeniably impressive, delivering the promised natural- sounding, transparent equalisation via an easy and responsive interface. The ear-mimicking setup of the filters always sounds ‘right’, even with extreme gain changes, and the science in which the plugin is rooted clearly succeeds.

Start messing with the frequency ranges, though, and things aren’t quite so clear cut, as EQuivocate becomes akin to a weird paragraphic EQ thanks to its unusual filter shaping and totally discrete band processing. Not ideal for conventional mixing duties, then, but of potential interest to electronic experimentalists looking for a new approach to filtering and EQ.

Expanding greatly on EQuivocate’s core premise, Elevate is a mastering limiter and maximiser that works its dynamics-shaping magic on each of the up-to-26 bands independently, without - it’s claimed - distortion, pre-ringing or other artefacts. You can stick to the top-level Main page and have Elevate do all the hard work for you, or dig into the Sub-Module pages and tailor the processes to the specific needs of you master.

In the Main page, the Limiter Gain and Ceiling sliders govern the threshold and maximum output level, while Speed adjusts the attack and release times together. Activating Adaptive Gain applies more compression to louder parts of the signal as it approaches the threshold, with the numeric parameter setting the maximum distance in dB with which a given band is permitted to stray. Adaptive Speed pulls off similar trickery for the attack, release and look-ahead, to reduce pumping.

After limiting, the signal hits the Transient Emphasis stage, where lost transients can be restored and even boosted, again with an Adaptive setting for automated per-band control. At the end of the path, the Spectral Clipper serves up transparent clipping, the Drive slider piling on the loudness and distortion, and Shape transitioning from soft to hard clipping.

The first three of the four Sub-Modules let you hone each process by tweaking various parameters on a per-filter basis. On the Filter Bank page, the triangular filter frequencies can be detached from the default Mels scale exactly as they are in EQuivocate; while the Limiter/EQ page offers 6dB of bipolar gain adjustment for each band, with metering of gain reduction as well as I/O levels.

On the Transient page, the transient emphasis of each filter is set between 0 and 200%, adapted in terms of multiband width, and metered. The fourth Sub-Module, Clipper, duplicates the Spectral Clipper controls and adds a visual clipping curve and metering. Lastly, at the top of the interface, a trio of global meters monitor input and output levels or gain reduction/transient emphasis for all active bands over time, or repeat the metering from the Limiter/EQ page; and the main I/O meters report both peak and RMS levels.

High as a kite

As you might expect, Elevate is much more comfortable working outside Mel scale mode than EQuivocate, but that particular filter distribution is - by design - still very much the sweet spot, as it were. The adaptive algorithms are quasi-sorcerous, yielding uncannily smooth and transparent limiting with minimal tweaking, and we absolutely love the Transient module, which is just as welcome as a creative tool as it is a corrective one. The Clipping section is perhaps less compelling, but, handled with care, it can add plenty of loudness.

While EQuivocate could reasonably be described as a deal-sweetener (if Elevate included the Match EQ, you wouldn’t really need it at all), Newfangled’s bold, innovative limiter/ maximiser is worth every penny of the asking price on its own - and then some. It’s one of the most exciting, radical mastering plugins to hit the desktop in quite a while.