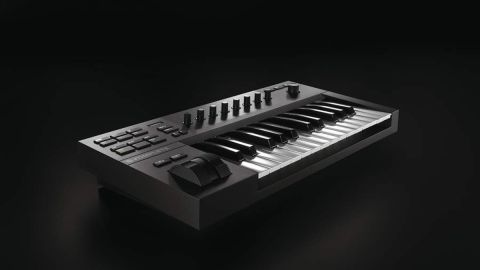 At these prices, the A-Series makes for a fantastic entry point into Komplete and music production in general.

As great as the S-Series is, however, with prices starting at £239 for the 25-key S25 and hitting £799 for the S88, it’s a bit of a reach for many novice producers. So, to open up that end of the market, NI has come up with the A-Series - a much cheaper, cut-down, bus-powered USB 2.0 controller keyboard that interfaces with the exact same Komplete Kontrol software.

Available in 25-, 49- and 61-key versions (we received the A25 for review), the A-Series borrows many of the S-Series’ best features, including the 4D Encoder (a joystick/rotary control/button combo) for software navigation; eight touch-sensitive knobs for plugin parameter control; beefy pitch and mod wheels; and most of the same backlit buttons, albeit laid out slightly differently. There are, however, two major cuts: the dual colour LED screens (or alphanumeric LEDs on the S25, which still languishes at Mk1), and the unique per-key Light Guide LEDs, which mirror Kontakt’s coloured key assignments and work with Komplete Kontrol’s Smart Play features to highlight the notes of selected scales and chords. The screens have been substituted with a tiny OLED display for text-only visual feedback, but Light Guide is simply gone - although Smart Play itself still works, of course. Also missing are the touchstrip and one of the two footpedal input jacks around the back, both of which are acceptable losses.

Despite being made entirely of plastic, the A-Series shares the superlative build quality of its much more expensive siblings, from the confidently solid casing, and laterally immobile pitch and mod wheels, to the consistent knob resistance and nicely sprung semi-weighted keys. Interestingly, the keybed is designed by NI itself rather than Fatar, which makes the S-Series beds for them, and is up there with the very best that we’ve come across in this price range. NI tells us there are no plans to switch the S-Series to the same one, though, as the Fatar is the ‘superior’ of the two.

Although they can be employed as regular ol’ MIDI keyboards with any software, the A-Series is absolutely intended to be partnered with Native Instruments’ Komplete Kontrol (included) and/or, to a lesser extent, Maschine (Elements edition included) software. Komplete Kontrol is essentially a host shell for NKS-enabled plugins that runs standalone or as a plugin (VST/AU/ AAX) itself, providing bidirectional communication between instruments/effects and the keyboard.

It all starts with a push of the A-Series’ Browse button, which opens the Komplete Kontrol browser onscreen. Here, your NKS instruments and their presets are navigated using the 4D encoder, drilling down through the Type and Mode tags to get to the sound you’re after, with the names of instruments, tags and presets flying across the OLED display as you scroll through them. Clicking the encoder loads the selected preset and its host instrument plugin, ready to play. This can then be followed by as many NKS-enabled effects plugins as you like, each browsed and loaded in the same way, with the 4D encoder and Shift button used to step through the chain, and bypass, delete and reorder its constituent effects.

Alongside Komplete Kontrol integration, the A-Series (and S-Series) keyboards also serve a secondary role as DAW controllers. Known as ‘Host Integration’, the specifics of this functionality vary from DAW to DAW, and involve some very brief faffing about in terms of initial setup in certain cases (we’re looking at you, Ableton Live). Once everything’s up and running, though, it works very well.

The transport buttons - Play, Record, Stop, Loop, etc - hook in just as you’d expect, while pushing the Track button switches the 4D Encoder, all eight parameter knobs and the Previous/ Next buttons over from Komplete Kontrol to DAW control (switch them back with the Plugin button). Take Logic Pro X as an example: the knobs control the volume faders and - with the Shift button held - pan for eight tracks at a time; the Previous/Next buttons (with Shift held, oddly) handle mute and solo for the selected track; while the 4D Encoder acts as a playhead jogwheel when twisted, and is used to navigate through tracks and regions thereon when clicked up/down and left/right.

At the time of writing, A-Series Host Integration was up and running with Logic Pro X and GarageBand, with Ableton Live in the pipeline.

The best thing about the whole Komplete Kontrol/NKS concept, though, is the automatic mapping of plugin parameters to the A-Series’ eight knobs, across an unlimited number of button-accessed pages. NI’s Massive, for example, maps its eight Macros on the first page, EQ and Master controls on the second, FX on the third, Oscillators on the next three, etc. With the S-Series, these assignments are always visible in the dual displays, or the alphanumeric strip under the knobs of Mk1; to find out what a knob does with the A-Series, you have to touch it, revealing the name and value of its mapped parameter on the OLED screen. Clearly, the dual display workflow is much faster and more intuitive, but the A-Series display also tells you the name of the page you’re on, so it doesn’t take too long for the main assignments on each page of your favourite instrument to start sticking in memory.

As for Maschine, the A-Series doesn’t offer anywhere near as much hands-on action and visualisation as the S-Series, which capitalises on those big screens and features various Maschine-dedicated buttons. You do, however, get note input (natch), transport, Group and Sound navigation within the Song and Ideas views (and a button to switch between them), and plugin control.

NI have made fewer compromises than we would have expected to make a Komplete Kontrol keyboard at almost a third to half the price of the S-Series. Yes, the loss of the screens is a sizeable downgrade, but the OLED does a pretty good job, and you still get all the same info from the Komplete Kontrol and Maschine GUIs anyway, so the end result is the same. Indeed, it could be argued that Light Guide is in fact the greater loss, as there’s no workaround for it. Even with those things taken away, though, and the reduced level of Maschine integration, we’re still very much blown away by the value proposition presented by the A-Series. Incredibly well-built and wonderfully playable, they deliver up the Komplete Kontrol experience at a truly irresistible price.