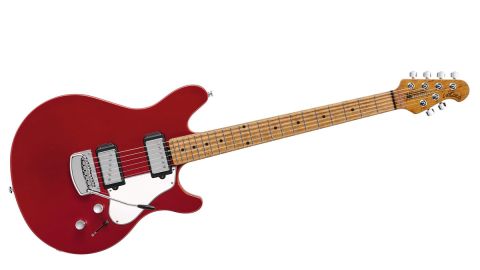 One of the classiest, most intelligent new designs that we’ve encountered that covers huge sonic ground with style and class. It’s Valentine’s day indeed!

The Valentine was first launched back in 2016. The following year saw the Valentine, along with a trio of natty new colours, got a vibrato option to herald 2018. As ever, if it ain’t broke...

The Valentine is, of course, the signature model of Maroon 5’s James Valentine - one of the very select and hugely eclectic artists that have MM signatures. His original signature model was a big hit in our office not least due to the fact it introduced a new body shape, interesting pickups and electronics and featured one of those necks that have really helped to put MM on the map over the past four decades. And while new colours help to stimulate the interest, the addition of Music Man’s modern vibrato to this previously hard-tail only design elevates it into quite the stylistic hybrid.

The Valentine’s neck is very similar with very Fender-width nuts: measuring 51.23mm. The Valentine goes for a rounded C overall which front-to-back measures 19.3mm at the 1st and 21.5mm by the 12th. It features that wheel-style, and very practical, truss rod adjustment along with Music Man’s own five-bolt neck-to-body join on a nicely rounded body heel.

Music Man’s Modern vibrato mixes old-school bent-steel saddles with two height adjustable pivot posts, a push-fit, tension adjustable arm and a steel top-plate, although the deep-drilled block material isn’t specified. The unit, by design, sits flat on the body’s face with no up-bend; down bend is virtually to slack and, partly thanks to the Schaller rear-lock tuners, return-to-pitch stability is excellent.

The Valentine originally (sort of) aimed to cross a Telecaster with an ES-335 and although both pickups look like humbuckers, mounted in proprietary recessed rings with both height and tilt adjustment, the bridge unit is a single coil with its protruding diagonal magnetic poles staggered to match the camber of the strings. But the Valentine has a few more tricks up its sleeve, not least Music Man’s latest hum-reducing Silent Circuit plus a gain boost (pre-set to around 10dB but it can via an internal trim pot be increased to around +22dB) introduced by the push/push volume control.

The Valentine is a beautiful mash-up of numerous instruments and inspirations: its Les Paul-ish rounded lower bouts blend with a sort of double-cut Tele vibe, not least with its slab style and smaller radius top edges. There’s no body contouring but the body - from bass-side to treble - is tapered with edge depths running from approximately 35mm to 41mm. The weight is excellent too and it feels really, really comfortable. The oil and wax-finished neck feels superb in the hand and the Valentine summons up as many sounds as the instruments that inspired it.

Kicking off clean on the single coil bridge there’s plenty of a Tele’s steely honk, which is contrasted by the neck’s thicker and chewier humbucking voice: two very different characters. In combination they work superbly for a mix that has hollowness and sparkle in equal measure; hit the tone switch to split the neck humbucker and it becomes a little thinner with a little more of the Tele’s wide pickup mix - both timeless sounds. Split though, the neck humbucker throws a nod to that smoother Tele neck single coil, but here it sounds clearer than most, and with an appropriate amp voice this Tele-like side of the Valentine would easily cover your Americana tour alone.

But it’s just one facet of the Valentine’s multi-voicing; clean up the reverb and kick in a little compression and the pickup mix encourages your Rogers funk or Cropper soul, the choice of either the split or full humbucker adding tonal shade.

Switching to a rockier set-up and there’s a glorious bright but not sharp-edged rhythm tone from the bridge that’d cover the bluster of the E-Street Band on full tilt or classic era Britpop jangle. The boost is equally multifaceted: from a simple solo boost for those jam gigs, adding just a little hair, to light crunch or frankly another level of saturation to an already cranked amp. You choose.

And that’s the thing about the Valentine: it references so much but never sounds clichéd and with simple, easy-to- drive controls you’re very much in charge. The vibrato addition here is simply the icing on a very tasty cake indeed.

The Valentine takes the ball and runs it out of the park. It’s simply one of the classiest, most intelligent new designs that we’ve encountered that covers huge sonic ground with style and class. It’s Valentine’s day indeed!