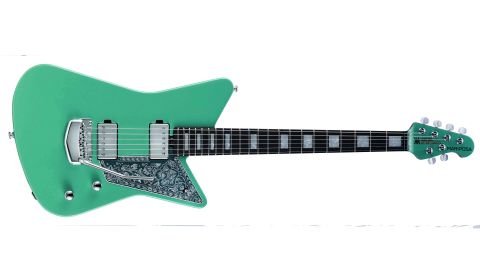 It’s another superb Music Man guitar. A very fit-for-purpose musical tool in an original and imaginative dress. Where could you take it?

The Mariposa is a new original shape designed in collaboration with Mars Volta/At The Drive-In guitarist Omar Rodríquez-López.

While he's known for his Ibanez ORM signature, the new Music Man Mariposa vision appears to be a more complete and innovative design – and that’s just the shape. Whether or not it looks cool to you (we must say that we immediately fell for its charms), there’s no doubt this is one very sharply dressed guitar.

“Omar has played Ernie Ball strings since the early days of At The Drive-In and has been a personal friend for many years,” explains Music Man sales manager, AJ Braman. “He started playing Music Man guitars exclusively officially in 2015 with the Albert Lee HH and the St Vincent guitars being his main axes.

We’ve talked for years about building something together and creating a new design from scratch. The inspiration to do it really picked up steam during the At The Drive-In reunion tour, where he wanted a love child of what he already played.”

Firstly, it is a beautiful light weight and, played seated or strapped on, it feels way more comfortable than its angular outline might suggest. Under the opaque finish is African mahogany (Music Man also refers to this as okoume) that’s 41mm thick.

Its flat front has quite a small edge radius, while the back adds a ribcage contour and a larger edge radius. The heel is typically rounded and the tightly fitting neck screws on with five screws, rather than four. The Turbulent Green pickguard is lightly engraved with a flower motif and was designed in collaboration with Miami artist Peter Santa-Maria.

Both covered humbuckers are made by Music Man with Alnico V magnets and relatively high DCRs. They’re also screwed directly to the body.

A superb design that looks as good as its smooth and hugely in-tune function. It’s set flat to the body for down-bend only

This compensated shelf nut helps to dial in perfect lower-fret intonation. Again, this style of nut is used across the Music Man range.

We can’t recall a guitar that uses two volume controls and no tone control like the Mariposa. It’s all part of Music Man’s “tethered tone circuit” concept.

This PCB holds both volume pots while small surface mount components provide what appears to be a simple treble bleed circuit, which Music Man calls a “passive bright circuit”.

The name Mariposa, meaning butterfly in Spanish, is a track on Omar’s Blind Worms, Pious Swine album – one of 14 records he released in 2016 alone – and is also the national flower of Cuba.

“Mariposa was a name we created and presented after the name Omar originally wanted, Luna Rosa, was taken and there were trademark issues there,” says AJ. “We fell in love with the Mariposa name because the guitar shape actually looked like a butterfly when hung on the wall.

"The top horns and bottom part of the body matching aesthetically with the name resonated with us, so we went with it.”

The 7 best new signature guitars of 2019

The votes are in. Here are the year's top artist models as ranked by you

The lightly gold-flecked metallic gloss finish is much bluer than is suggested by the colour, Dorado Green, which is named after a town close to where Omar was born in Puerto Rico, and is one of the four available hues, alongside Pueblo Pink, Imperial Black and Imperial White.

Music Man necks are always special and this is no exception. Made from slab-sawn roasted maple with a deep milk chocolate colour and a silky smooth oil and wax finish, the fingerboard references a Les Paul Custom with rectangular block inlays on the classic black (not striped) ebony.

The stainless steel frets are beautifully installed and of a medium/tall gauge. Typically, we have the very functional four-over-two headstock – here it’s gloss-finished and colour-matched to the body – and the compensated ‘shelf’ nut that features throughout the range.

Hardware is very familiar: the excellent vibrato with its push-in adjustable tension arm and those neat and efficient Schaller rear-lock tuners.

It’s a very simple guitar with few of the sonic tricks and tweaks we see on numerous other models. The dual humbuckers have no coil-splits and there’s no active level boost like we see on the Lukather, Valentine or Petrucci models – there’s not even a tone control! No, the two knurled metal Telelike knobs control the individual pickup volumes only.

“A lot of players, including Omar, prefer simple controls that allow for easy tonal changes,” AJ explains. “Instead of the ‘standard’ single volume and tone to only roll off the high-end, we proposed using two volume controls, because the passive interaction between the dual volume pots creates a natural variation in the high-end when set at different levels. Omar liked what we call our ‘tethered tone circuit’ from the start, so the design stuck.”

Unscrewing the thin aluminium cover plate, which is not recessed, reveals a very neat compartment that’s carefully shielded with graphite acrylic resin and thick foil under the pots, while that cover plate is grounded via a small wire from the earth point.

The volume pots (500k audio taper) sit on a neat PCB to which all the connections are tidily soldered. There are some very small surface-mount components that are hard to make out. You can see a 154 code resistor (150kohm) on both volumes and an additional 683 code resistor (68kohm) on the bridge, but it’s difficult to determine exactly what they’re doing.

“The PCB is loaded with a few discrete components that make up our passive bright circuit,” says AJ. “This design allows for some high-end to remain present as the volume knobs are turned down.”

Under the engraved pickguard there’s a routed channel that takes the wires to and from the toggle switch, which is screwed directly to the body – only the tip protrudes through a slot in the pickguard.

The pickups are custom-wound by Music Man with relatively high DCRs of 15.64 (bridge) and 13.96kohms (neck), and “both use Alnico V magnets”, says AJ. “Yes, they are pretty hot humbuckers and tonally they fall somewhere between those on the Axis and Armada.

"They also screw directly to the body with no springs or foam, so their heights are pre-set unless you add shims of your own. They’re also further from the strings than most (when measured from the underside of the E strings, fretted at the top fret and the top of the outer polepieces): the neck sits some 3mm from the strings on the bass side, closer to 4mm on the treble side.

The bridge is pretty much 4mm on both the treble and bass sides. “During the prototyping process, we were able to dial in the style, locations and the heights of the pickups Omar felt most comfortable with,” says AJ.

As good as this neck feels, it is relatively narrow with a nominal nut width of 41.3mm (1 5/8th inch) that here measures marginally wider. It results in a string spacing that is tight at the nut – 34mm widening to 54mm at the bridge. This gives it quite a tapered feel that drops into the ‘just right’ territory, by the middle of the ’board. With what feels

like a very nice classic ‘C’ profile, it moves from 20.45mm at the 1st fret to 23.5mm by the 12th in terms of depth. But there’s certainly something to be said for just plugging in and playing. First off, the Mariposa doesn’t sound like its DCR readings might suggest and despite the relatively low pickup heights there’s a musical balance between the two with the bridge sounding a little thinner.

It’s a mismatch that some might find unbalanced, but rather like a Tele with a neck humbucker there’s distinct character to this voicing. The volumes don’t actually sound like they have a treble bleed circuit as they soften nicely with a little roll-off: clean then, believe it or not, select the neck and pull back the volume for a plummy jazz sound. Both pickups, especially the bridge, have quite a steely character.

The highs are slightly pulled back and smooth, and there’s a full and strong midrange yet it’s certainly not dull nor does it have an excessively middly honk. The dual volumes actually make considerable sense: you mute one pickup and the three-way toggle becomes an instant kill switch, or you can just leave the toggle in the mix position and use the volumes to voice considerable tonal shades, like on a Les Paul.

It seems like quite a specific voicing and means that jangly cleans sound huge and more gained voices are strong. Probably by design, it might be a deceptively simple drive but that’s perfect in conjunction with your pedalboard.

It’s not just the sounds that impress, either. The intonation is superb and when the vibrato is set flat with no up-bend it’s super smooth – light shimmers or more extreme down-bends are effortless with excellent return to pitch. There’s a lovely smoothness to the response right across the fingerboard, too.

Top-fret access is a little impaired by the angular treble horn, even though that’s offset by the trim body thickness and that round-nosed heel – which is about the only negative in a blue/green sea of positives.

Signature guitars can be highly divisive – their design, sound and function often only appealing to the artist in question. And, yes, there’s plenty of that here; a shape like this simply won’t be everyone’s bucket of cool.

But you only need to look at other Music Man signature collaborations, such as the Albert Lee and St Vincent models, to see that Music Man loves taking stylistic risks – you might even believe it’s encouraged. Omar Rodríquez-López fits the bill perfectly, as a prolific, influential and hard to categorise player who clearly loves pushing the boundaries.

As his legion of fans will know, Omar plays left-handed and Music Man currently only offers left-handed options on the Axis Super Sport, JP6 and JP7, but we’re told we can expect a lefty Mariposa in the near future.

It’s also far from a cheap date, more expensive than the humbucking Albert Lee and St Vincent models. However, “the Mariposa features appointments that those other two guitars do not,” AJ justifies, “[such as] a painted headstock, block inlays and a more expensive G&G case.”

MusicRadar verdict: Technically though, it’s another superb Music Man guitar. A very fit-for-purpose musical tool in an original and imaginative dress. Where could you take it?