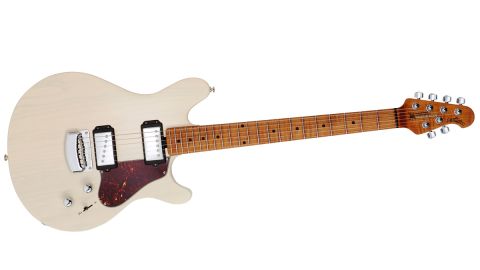 Whether or not Maroon 5's style of funky rock floats your boat, we think James Valentine's signature Music Man most definitely will.

Ever since Ernie Ball took over the Music Man brand, its guitars have remained some of the best made and most technologically forward-looking available.

They're also immensely rewarding to play. Superb necks, great pickups and hardware, plus impeccable build have enticed a player roster that includes Steve Lukather, Albert Lee, John Petrucci and Steve Morse. The latest addition is James Valentine of Maroon 5, and while a mere stripling by comparison to the aforementioned guitar legends, Valentine has a strong idea of what he wants in a guitar and so, along with the craftsmen at Music Man, has created his dream machine.

Valentine's desire was for a guitar that blends innovation and a modern vibe, with a reassuringly classic appeal - a bit Gibson semi, a bit Fender Tele perhaps. So, with that in mind, an ash body - in this instance finished in what Valentine calls 'Trans Buttermilk' ('Trans Maroon' is, of course, available, too) - has been mated to a nutty-looking roasted maple neck. This is delightfully figured and comes with Music Man's proprietary wax and oil finish for a tactile but drag-free experience.

Music Man has always thought outside of the box, never slavishly following convention. Hence the now-familiar body-end truss adjustment where you don't need to slacken strings, let alone remove anything; oiled necks; the asymmetrical five-bolt heel joint for rock solid stability; the compensated nut slots that even out intonation; the pickups with three height adjustment screws so their angle to the strings can be accurately set and they stay rigid in their surrounds; the barrel style jack socket; the four-plus-two headstock. And so on.

Build and finish are, as always, dead on. And we do like the slightly enlarged peghead and generally bigger feel of this and other recent Music Man instruments. Although some love it, others have never got on with the instruments' often diminutive feel when compared with more familiar Gibsons and Fenders. But this feels, shall we say, 'normal'.

Pickups and controls are interesting: while both pickups are standard humbucking size, the bridge unit is actually single coil, its pole pieces slanted like a Tele or Strat across the chrome cover.

Controls are simple, but with a couple of neat twists in the form of push-push pots on both controls - an active boost of up to 20dB on the volume, and a coil-split for the neck humbucker on the tone. We like the 'hidden' nature of these sonic extras, because it adds genuine usability but keeps things uncluttered and intuitive.

Tuners are locking Schallers, while the bridge is Music Man's Modern Classic hardtail; the rear portion is covered, but the bent steel saddles are exposed for palm-muting.

In the hands, Music Man guitars always feel amazing. They seem to have that 'played in' vibe without the need for relic'ing or other such fakery. Here, the Valentine's neck feels lovely and fulsome in the palm and, even though it has a pretty narrow nut width at 41.3mm, it manages not to feel cramped at the low frets and quite possibly aids dexterity in the fretboard's middle reaches.

The 22 frets here are stainless steel, narrow and tall, so bending is not compromised and there's a feeling of accuracy and that tad of extra fretting space that narrow wires provide - especially at the top-end.

At an average weight of 8lbs (3.6kg), it's a comfortable lump to hang around the neck and the on-strap balance is perfect. Plus, jumping to it from a Les Paul or Tele springs no "where's the 12th fret?"-type surprises. The body's relative slenderness, aided by Sterling's tapered body suggestion, means the instrument tucks into the ribcage just right.

Plugging in to our demo Supro 1600 Supreme, the guitar feels instantly at home. There's no big volume drop when switching from humbucker to single coil, with plenty of girth from the neck and twangy 'bark' from the bridge - which is possibly a little darker than the average Tele. The middle position blends the two beautifully for a lovely mix of warmth and brightness.

Push the tone knob and it pops up to split the humbucker's coils and bring a more Strat-y personality to the guitar; select coil-tapped neck and single-coil bridge together and we're in funk heaven - where Valentine spends much of his time for a Maroon 5 gig. Engaging the volume knob's boost pushes the Supro's front-end into delicious warm drive, and experimenting with guitar volume level elicits all manner of mild-to-medium drive tones, from a bit of extra grunt to full-on crunchy distortion. This, and the coil-split option, means this rather simple-looking layout is, in fact, a comprehensive tone selection system. Hours of fun - and not a duff tone in sight!

The Valentine looks familiar but just different enough, feels great sitting or standing, boasts a real player's neck, and its palette of tones - delivered in a fuss-free manner by a clever control and switching setup - is simply superb. Of the hundreds of guitars that have sought to blend humbucking and single coil tones, this has to be one of the most successful.

Yes, it has a 'custom shop' price tag, but it also offers genuine custom shop quality for no more than many 'boutique' instruments that are no better built or well-appointed. Some of the recent 'non-clone' guitars we've seen  - Knaggs, John Page and Fret-King spring to mind - have shown that there is life outside of Corona and Nashville. Ernie Ball Music Man has, of course, been in that club for years, but this new offering from James Valentine is a class act, and a fine and welcome addition to a never less than impressive range.