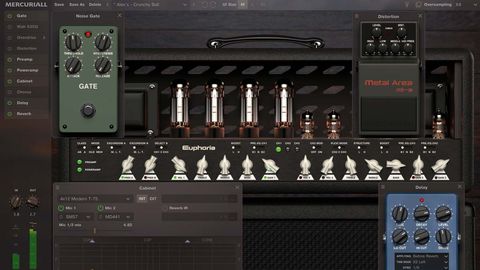 Not as flexible as some, but this still sounds awesome and is very competitively priced

Software developers Mercuriall clearly have a thing about distortion, particularly the kind that’s derived from the world’s most respected guitar amps and pedals.

In fact it’s fair to say their guitar amp obsession most likely got them into audio software developing in the first place, and if you fancy trying out some of their early efforts they are free to download from their website.

Euphoria (VST, AU, AAX and standalone) is their latest ‘pay for’ release and is based on the Bogner Ecstasy 101B amp.

Much like Reaxis, their Mesa Boogie emulation, the amp emulation is part of a full rig, including pedals, amp, cabinet and post-cabinet effects. However, the big news is Euphoria introduces a brand new interface. Not only does this deliver a step up in realism, but it’s also more flexible, with floating windows handling the pedal, cabinet and post effects modules.

The new interface also adds some further new features including an input Tuner and Undo/Redo, and it can also be rescaled (M, L and XL). We understand that the plan is to roll out this new interface across their existing amplifier plugins, which is excellent news.

The Bogner Ecstasy 101B is a classic and very expensive boutique amp head first introduced in 1995. The 3-channel design delivers a massive range of tones from clean (CH1) to crunch (CH2) to classic high gain (CH3).

There are also some modded versions around as well and here Mercuriall have included the Mark Cameron CH3 mod. However, what really marks this out as a boutique amp are the plethora of available settings that grace both the preamp and power amp sections, and they are all here on Mercuriall’s emulation.

Starting with the preamp, you’ll notice that, in addition to Volume, Gain and 3-band EQ, CH1 has two pre EQ brightness settings (B1 and B2). There’s also a Boost option which turns this primarily clean channel into a more ballsy one. Next up, CH2 and CH3.

These share tone controls but settings are retained with each channel, which is a nice touch. Much like CH1, you have the pre EQ and Boost options as well as a gain setting (Structure) that influences the overall channel gain (high or low). Once again where these switches are shared, positions are saved with the channel.

All settings have a noticeable impact on the sound, and sometimes throw up surprises. Boost B2, for example, is cleaner than B1 for CH2 and CH3. The Plexi mode is also interesting as it’s less driven but more edgy than the regular CH2 and CH3 sounds.

Possibly the most subtle change is the CH3 mod, which adds some drive and articulation to the regular CH3 sound. Of course, the power amp section plays a role as well. Features include amplifier type (Class A or A/B), speaker cone damping (Excursion), Presence and a triode/pentode switch (Old/ New).

Finally, the Excursion and Presence have a pair of assignments (A and B) so you can have two different settings across the three amp channels. Very smart. All told, the preamp and power sections deliver an amazing array of core amp tones.

The successful fruition of analogue gear emulation has been one of the key wins for audio software development, and in the process, it has democratised the availability of expensive or rare hardware.

Arguably the best way of doing this is component modelling, whereby various parts of the hardware circuit are individually modelled and recreated using algorithms.

As they began software developing, Mercuriall followed this well-trodden path but along the way added an extra layer to the process, using artificial neural networks to learn particular input/output behaviours.

These could then be translated into algorithms and thus make the CPU intensive component modelling more realistic to implement. They continued to develop their Neural Hybrid Engine, and the latest v1.5 iteration can be found in Euphoria.

It includes further optimisations over the v1.0 system used in their SS-11X pedal plugin, though you can’t A/B the two engines in the same emulation so you can’t judge the difference.

At higher oversampling settings (x8 is the highest) Euphoria still has a considerable CPU hit. That said, it’s good to see developers striving to improve the sound and efficiency of their plugins.

Euphoria’s amp section is topped and tailed by processing modules in a fixed order. Four pedal slots are before the preamp: Gate, Wah, Overdrive and Distortion.

Meanwhile after the poweramp you’ll find the Cabinet, and then Chorus, Delay and Reverb. So, including the amp, that’s 10 modules in total, and the list down the side of the window with on/off for each also serves as a launcher for the pedals.

Many of the pedals are emulations of classics from Ibanez, Boss, Mesa/Boogie and Dunlop, and we particularly like the Super Overdrive and Metal Zone-inspired effects.

Moving on to the Cabinet, this is much like the one in Reaxis and is functional rather than fancy. You can blend two mics, each with distance and horizontal cone position, and there are four cabinets and three mics to choose from with modern scooped sounds (T-75) and more classic mid-range tones too (G12M).

Euphoria sounds awesome and the amp emulation is one of the most flexible we’ve tried. The new interface looks great and we like the floating pedal scheme, although it would be great to be able to re-order the effects (we understand this is something that is under consideration).

We’d also like to see more control of the overall signal flow, preferably with panning for the cabinet mics. But these are minor gripes and shouldn’t detract from Mercuriall’s most impressive plugin to date.

MusicRadar Verdict: Not as flexible as some, but this still sounds awesome and is very competitively priced.

"The ground covered by Euphoria is staggering. If this was a blindfold test, I would think I was testing 3-4 different amps with multiple channels. There’s simply nothing it can’t do tone wise."
Honest Amp Sim Reviews