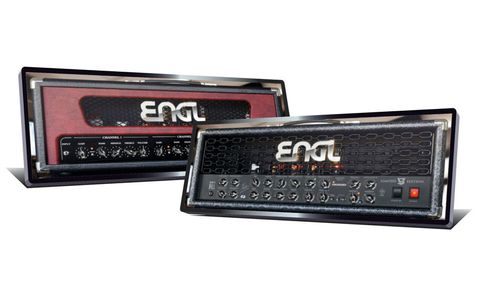 Look beyond the presets and these are two amps with flexible, if aggressive personalities.

Over the last year or so, UAD has up-scaled the number of plug-ins which reach its coveted UAD-2 platform via its Direct Development Partner Program and the latest of these is the ENGL Amplifier Bundle, in collaboration with Brainworx. The two guitar amplifiers in the package are the E765 RT and the E646 VS and there are a few tricks in store beyond emulation alone.

The immediate control set of the E765 is the simpler of the pair, with twin channels allowing you to dial in contrasting Gain, Bass, Mid, Treble and Volume controls on Channels 1 and 2 before A-B'ing them to pick the right sound for your mix.

However, the real fun starts when you extend the feature set by pressing the FX Rack button at the top, which launches a second panel, devoted to re-mic'ing and further sonic manipulation.

Increasingly, amp simulation plug-ins allow you to play with microphone placement in front of the speaker cabinet but this option isn't present here. Instead, Brainworx's inbuilt Impulse Responses have captured the sound of the 765 using a variety of microphones in a number of configurations, so scrolling through these provides a wide selection of possible treatments.

The rationale is that virtual mic'ing can produce phase and EQ problems and this approach removes the pain. You'll have to decide if this methodology is too compromised but it does speed up the rate of finding an appropriate sounding treatment. Elsewhere, the FX Rack contains Noise Gate, Delay, Filters and Power Soak effects controls, all of which broaden the palette of available tones considerably.

The 646 VS plug-in benefits from a press of its own FX Rack button too as, despite launching more controls, the available parameters actually increase in size, making them easier to read. Again, the bottom section is devoted to guitar tone, this time with four channels of settings to compare and contrast, with Clean, Crunch and two devoted Lead channels.

Again, the mic'ing Impulse Responses are here, alongside the extended FX Rack control set, so in combination with the greater options in the lower section, this is perhaps the more flexible of the two plug-ins.

The amps' separate sonic options combine to impressive effect - if you can't find what you need from one, the other picks up the slack. The presets don't initially give you that impression, though, and we're surprised that UAD and Brainworx didn't produce a wider range of starting points in this regard; it requires some dial tweaking to coax out the full range of the amps' capabilities.

Once you get busy, however, you'll discover tones which are perfect for rock and metal styles but can also play an impressive role in pop productions, where the definition, sizzle and drive can produce a great range of colours. I even found dialling in some of the crunch tones on auxiliary channels under vocals and synths extremely effective. Guitar amp simulation has become a battleground for a range of companies, so check the competition, but these are impressive emulations of the wallet-busting ENGL hardware.