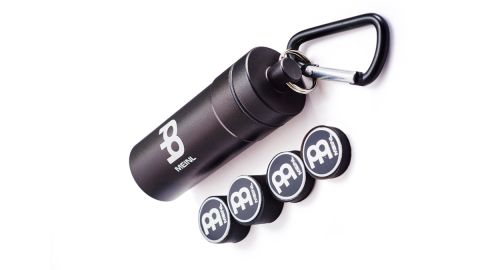 More than just a gimmick, Meinl Cymbal Tuners represent a cost-effective way to get more mileage from your cymbal collection - whether you need lower volume for home practise or an entirely new sound for a recording session.

Sometimes the most simple ideas are the best and at January’s NAMM Show Meinl won the ‘wish I’d thought of that’ award with the launch of its Cymbal Tuners, an uncomplicated new accessory designed to augment your metals.

There’s no avoiding the fact that Meinl Cymbal Tuners are, in essence, magnets dressed with Meinl branding. Their raison d’etre is to change the tone, volume and sustain of your cymbals when placed on the surface of the metal.

Each set includes two 4mm tall magnets and a larger 9mm pair. Both are 16mm in diameter. The Tuners live in a tough, metal screw-top tube with a handy carabiner-style clip for attaching to your stick bag or belt loop.

First impressions are that the magnets are strong. There’s a reassuring connection when placed either side of a cymbal and they definitely won’t work loose during a gig. The Tuners slide smoothly across the surface of the cymbal too, so they’re easy to reposition and won’t scratch your precious metal.

Placing the smallest Tuner at the edge of a 16" Medium Heavy crash, there’s a noticeable but not jarring drop in the fundamental note and the attack becomes more focused without killing the overall sustain. The closer they are towards the bell, the more subtle their effect.

The larger Tuners have a more pronounced impact on the sound and effectively turn our bright crash into a dry ride. Switching to a large/small magnet combo gives me the best of both worlds; a lowered note, some dryness and reduced volume, without straying too far from the cymbal’s fundamental character.

Next up is my trusty 21" ride. The small Tuners produce an appealing, dusky tone, and the cymbal sounds almost gong-like as we build up the wash. With so much cymbal surface to play with, the ride is where you can have the most fun experimenting.

Conversely, we found that, other than a reduction in volume, the Tuners had the least practical use on my hats.

Thinking outside the box, we stack an 18" crash on our 21" ride and clamp the two cymbals with the smaller Cymbal Tuners. The result is gloriously dark, dry and trashy, but with increased control. Yet another tick in the box.