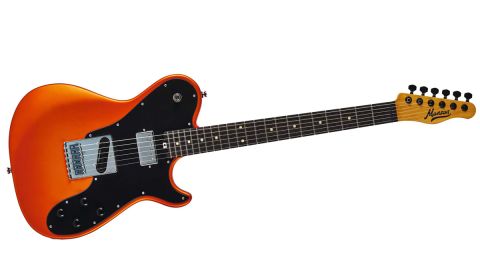 The MD-1 would certainly be our choice if big, gutsy voices are your thing.

Hugh Manson could well have become (like his brother Andy), an enigmatic uber-custom guitar maker with an order list as long as both his arms.

But while Andy chose the primarily acoustic route, Hugh followed his rock ’n’ roll DNA, most famously making a diverse and eclectic number of instruments for Muse’s Matt Bellamy, not to mention Zep legend John Paul Jones and Foo Fighter’s Dave Grohl - instruments heard and seen by millions. And, along the way, he founded a retail store and Manson Guitar Works.

The latest pro to be seduced by Manson’s charms is Skindred’s Mikey Demus with two closely related models based on Hugh’s simple but hugely functional Telecaster- based design. Like the MA models, the woodwork/spraying of the MD-1 and MD-2 we have here is done in the Czech Republic. Manson’s head luthier, Tim Stark, explains more: “Once they arrive in the UK they are individually assigned to each customer order. All the electronics work and assembly are then done in-house with our custom-built circuits and are wired with our new CTS signature pots and Sprague orange drop caps.” Today, we’re looking at the MD-1.

The highly competitive MD-1 kicks off at £1,199 in Dry Satin Black, although our version comes in its optional Atomic Tangerine, which adds £100. Both finishes have a beautiful silky sheen when, paired with the toned satin neck, means it’s a completely no-gloss zone.

The body, with light forearm and rib-cage contours, is two-piece alder completely hidden by the opaque finish. The Fender-style neck, with classic 648mm (25.5in) scale length, screws on in typical fashion. Near jet-black ebony is chosen for the fingerboard, which perfectly matches the single-ply Deluxe-style scratchplate that holds the shoulder-placed three-way toggle, individual pickup volume and tone controls plus the neck pick-up.

Gotoh is the chosen manufacturer for the hardware - a GTC201 Tele-style bridge with brass block saddles and SG381 tuners with height-adjustable posts that negate the need for string trees. Function is everything, which is hugely important for any instrument that’s going to played and toured. A nice touch is the wheel-style truss-rod adjustment that means tweaks are fast.

This guitar is not ultra-light in weight, but feels very purposeful when strapped on. Typically, as with virtually every modern Manson solidbody we’ve played, it has a lovely vibrant and strong acoustic response. The neck has a well-shaped full ‘C’ profile and quite beefy feel - approximately 43.5mm at the nut, a shade under 22mm deep at the first fret filling out to nearly 24mm by the 12th.

The MD-1’s Duncan sounds pretty familiar if we’re honest, with the big midrange beef of the dual-rail Hot Rails - with its cocked wah character - a near-perfect shoo-in for big walls of crunch and distortion. Clean, well, you sort of wonder if you’re on the bridge pickup, for it’s thick with quite a rounded high end.

Signature guitars, by their nature, can often be very specific-sounding to the artist’s needs. And, yes, that Hot Rails does do its thing and arguably makes the MD-1 less versatile overall but, well, as we said, slam that into a cranked anything and you’ll smile.

Even if Mikey Demus isn’t on your radar, don’t worry. Aside from specification there’s nothing that’s overtly ‘signature’ here. What we have is a typically Manson, fit-for-purpose road-warrior solidbody that has a hugely purposeful feel. The MD-1 would certainly be our choice if big, gutsy voices are your thing.