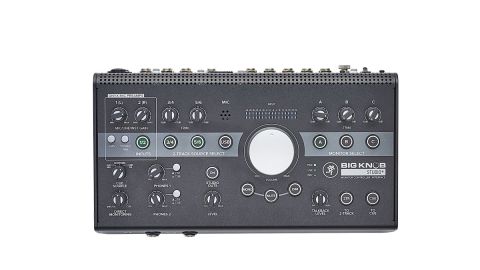 Even so, with more than ten years on the clock, it’s time things moved on, and you now have three brand new designs to choose from - Passive, Studio and Studio+.

Although visually similar to its predecessor, the top of the range Big Knob Studio+ is in fact part monitor controller and part two-in/four-out USB audio interface. This is a logical progression but inevitably makes the signal flow a bit more complex (more on that shortly). Connectivity-wise however, things are very familiar. The Studio+ can service three sets of monitors and two pairs of headphones, and all five include individual trim or level controls. There’s also a dedicated Studio output with level and on/off button that could feed either a dedicated headphone distribution amp or live area monitoring. Finally, there’s also a main two-track output (+4/-10dB). All outputs are 1/4” jacks wired for balanced and unbalanced use.

You get eight inputs in total. Two pairs (labelled 3/4 and 5/6) provide line level input, with 5/6 replicated on the front in 1/8” jack format. Inputs 1 and 2 are Onyx mic pres and these combi connectors can handle mic, line and instrument signals and include global phantom power. A further pair of inputs (Aux Mix/Cue In) are designed solely to feed the cue bus and could be used to source an alternative cue mix (from a separate mixer for example). On the subject of inputs, Studio+ includes not only an integrated talkback mic but also a dedicated XLR mic input. Both can be activated via foot switch. One thing missing, though, is the original’s dedicated turntable input.

Again, adding an interface makes the Studio+ signal flow both more capable but also more complex. Still, the key concept remains the same, namely one stereo monitoring bus (2-Track), which feeds the monitors, and one stereo cue bus (Cue). The 2-Track bus has individual switches to source the stereo inputs in pairs (1/2, 3/4 and 5/6) plus interface outputs 1 and 2 (USB), with output controlled via the large Volume knob and associated Mono, Mute and Dim switches.

The Cue bus has three input options - the physical Aux In, Source (whatever 2-Track sources are selected, minus inputs 1 and 2), and USB outputs 3/4 from your DAW. For zero latency monitoring, the Cue mix can be blended with inputs 1 and 2 using the Direct Monitoring knob, and each Phone’s output can select independently between Cue or 2-Track. Finally, for further flexibility, the USB input to your DAW can receive either the Mic inputs or the blend from the 2-Track bus.

The backlit buttons are a major bonus, but metering could be more extensive (ie output and input options). Overall, the Big Knob Studio+ is much more powerful than its predecessor, with a feature set that gives a unique combo of monitoring, talkback and interfacing.