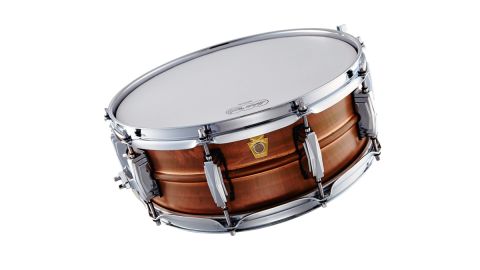 The price is eye-watering but should be considerably less in the shops. You are really paying for that Ludwig sound, which is a mystery, but certainly not a myth...

Ludwig has not messed with its winning formula for decades. So here we have the familiar Supra design, the difference being that Ludwig has replaced the standard shell with this funky-looking copper shell.

All Ludwig’s USA-made metal shells have the same seamless construction, a unique process that is crucial to the Ludwig sound and longstanding success. Paralleling this, Ludwig points out it has also been making copper-bowled timpani for almost 100 years.

Available in the two usual sizes, 14"x5" (as review) and 14"x6.5", the copper shell is dipped in a special solution and lightly lacquered for protection, so each shell is a slightly different one-off. There is no additional treatment applied to the inside. With its 1.2mm gauge copper and 2.3mm triple-flanged hoops, the drum feels heavy - much heavier than a regular aluminium Supraphonic.

Other than that everything is standard fare as found on other Supraphonics and Black Beauties. There are thick rubber gaskets under the 10 Imperial lugs and rubber washers to lock the tension rods.

The P85 strainer is unchanged for donkey’s years and shows its age - the basic, thin lever still feels precariously loose, and yet it is winningly simple and effective. Bearing edges are smooth and level, turned over at 45° with a not-too-sharp lip so the metal does not cut the head.

Most modern shells are a bit undersized, leaving a small gap between head rim and shell to prevent binding. In common with several other vintage designs, this copper shell is pretty close to the full 14", which leaves little leeway. So the head is jammed on, not tightly, but firmly.

Also because of the wide shell the lug bolts sometimes catch underneath the top flange of the triple-flanged hoops. This often happens with my 1960s Supras, so nothing seems to have changed. Yet despite - or maybe because of - these design anachronisms, the drum sounds peachy.

Copper has a darker, more mysterious timbre than either the brass Black Beauty or aluminium Supraphonic. There are hints of a woody timbre, but the metallic character still just about dominates. Tuned down lowish, with just-above-slack snares, the centre hit is deep and swampy - a meaty thud which retains a dusky tone and resonance, but is thick and treacly, Jeremy Stacey/Ash Soan-style.

Tuned high and bright you get that Ludwig crispness that has sold a million metal snare drums, whether brass, bronze, aluminium or copper.

The other defining characteristic of Ludwig shells is the centre convex bead, which is said to dry the sound a fraction. Thus it’s a tight, focused sound until you catch a rim-shot, when the shell resounds with a deep, sweet ping. And even then there is a sense of command.