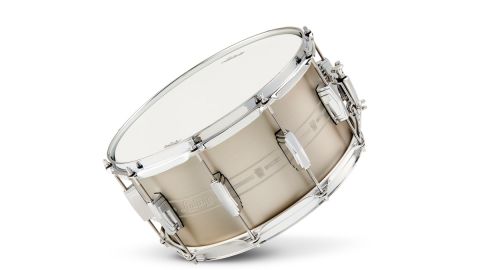 The Heirloom though has a pleasingly modern look with its laser engraved shell of muted silver in 5½" and (seen here) 7" depths.

In fact the shell is steel: flat brushed stainless steel to be exact. It’s 1mm thick and around the centre are three laser-etched bands with keystone motifs between the lugs. Plus, there’s a classic silver keystone air-vent badge.

The heirloom legacy is represented by 10 ‘flat’ Imperial lugs. The Imperial lugs we’re more familiar with today are mounted on Supraphonics which have spun shells with a centre bead.

Those Imperial lugs require a small half-circle cut-out to bridge the centre bead and hug the shell. On the Heirloom we have so-called ‘flat’ Imperials, which lack the cut-out since the shell does not have a centre bead. The basic design is 80-plus years old and has also been re-introduced on the latest Club Date kit. It’s a small point, but should please vintage Ludwig nuts.

Ludwig offers the Heirloom in 14"x5½" and 14"x7" versions. Shells are not spun - you can see the butt-join inside, plus the neatly bent over 45° smooth and level bearing edges. Hearteningly, there’s an updated throw-off. Ludwig has long continued to mount its ancient and rickety (by today’s standards) P85 strainer on expensive drums, so it’s good to see that this drum now has the P85-AC (Atlas Cast).

As expected from Ludwig the Heirloom does the business sonically. The drum is fearsomely loud when you need it to be. Strike it hard and catch the rim and it’s as destructive as any metal drum going. It’s also nicely controlled though. Rim-shots have a ripe clank but then subside quickly, so there is no prolonged ring that needs damping.

Wisely, Ludwig has equipped the drum with heavyweight 2.3mm triple-flanged hoops, wholly appropriate for a drum that expects to be attacked hard. We have the deep 7" drum, but being steel it is still bright and sharp. It works best tuned up mid to high where there’s pinpoint clarity while simultaneously the substantial shell works away underneath to deliver a fat rounded tone.

The die-cast replacement for the P85 has a notched tension nut that should not slip like the old one. The gracefully curved throw-off lever is also cast and attached at two points so it feels much sturdier, while the whole assembly remains neat and unobtrusive in P85 tradition. It took forever to arrive, but has obviously been the subject of shrewd thinking.