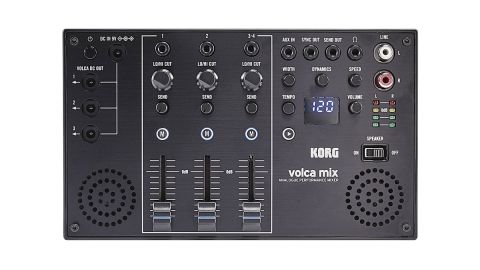 The Mix is useful in a lot of ways, and is fairly well priced, but it’s not the ultimate Volca accessory it could have been.

As great as Korg’s compact Volca instruments are, their rough-and-ready ‘budget’ status comes with a few usability caveats.

For one, they don’t ship with power adapters, so they’ll quickly chew through your AA batteries and their mini-jack outputs aren’t the most obvious fit for interfacing with a wider studio setup. In short, they’re crying out for some kind of power-hub-come-mixer - a need Korg are looking to fulfil with the Volca Mix.

Let’s talk positives first. While it’s not sexy, power is the Mix’s most useful feature. Unlike the rest of the range, the mixer ships with its own power supply - it can’t run on battery power - as well as a trio of cables that allow other Volcas to be hooked up to its three front panel outputs. Being able to power three instruments from a single hub is really useful.

As for the mixer itself, it offers three mini-jack inputs - two mono and one stereo. Each of these has a small front panel channel strip with volume fader, mute button, send effect rotary and a bi-directional filter. While the faders are small, they’re responsive enough for decent control over the levels. The filters, meanwhile, are clear and smooth although their range isn’t massive. In practise they’re more like hi/low-shelf EQs, better for adjusting the character of the sound than creating extreme effects or sweeps.

Alongside the effect send [see Send & Aux], the Volca Mix has a master compressor and stereo widener. At the master stage the signal gets split into lower and high frequency bands, with the two being affected individually. The stereo widener only acts on the upper frequencies, which is great for bringing mono elements to life without creating problems at the low end. The compressor, meanwhile, squashes the highs in relation to the volume of the low frequencies, creating a sort of sidechain-style pumping effect, with a Speed control to adjust the attack. While it’s not exactly geared toward traditional ‘gel’ compression, it’s great for adding gritty, throbbing dynamics when used with a strong kick or bassline. Not exactly an ‘all-rounder’ mix effect, but inspiring when used in the right context.

Output-wise, the Volca Mix has a headphone mini-jack, stereo built-in speaker and main stereo RCA line out. The speakers here are, as with the other Volcas, nothing to write home about - they lack any real bass and quickly distort when pushed to any kind of decent volume. Fortunately, there’s a front panel switch for deactivating the speaker, which we’d personally keep firmly in the ‘off’ position.

Sound quality through the main outputs is much higher quality though, and a small VU meter helps monitor levels to prevent clipping. It’s a slight shame you can’t use the headphone as a cue output - allowing users to monitor channels pre-fader - as this could be handy, particularly for live performers.

The inclusion of an effect send is a nice touch. The front panel send controls route audio to a mono minijack output, and audio can then be routed back in through the stereo Aux in. Unfortunately, there’s no level control for this input, which can be problematic if using external effects that lack their own output level controls. When not using an external effect, this Aux input can function as an additional input. Again, lack of a level control could cause a problem though. It’s worth bearing in mind too that the Aux input bypasses the Mix’s master compressors and widener.

The weakest element of the Volca Mix is its sync functionality. As with the whole Volca range, the Mix is equipped with analogue pulse sync, for aligning the tempo of multiple machines via a simple noise signal. However, the Mix features only a single sync out, meaning it can only act as a master clock, rather than sync to other devices. The only way to set the tempo is by hand, using the front panel rotary and screen, and while there is a handy play button for starting/stopping sync messages, with no MIDI or sync input, there’s no way to synchronise the Mix with external gear or a DAW.

Inclusion of MIDI in/out ports or USB sync - or, even better, both - would have made the Volca Mix a far more capable sync ‘hub’. Korg have clearly intended to keep things cheap and simple, but by doing so it feels like they’ve missed an opportunity to bring the Volca range into more of a ‘pro’ studio space.

Personally, we’d have loved the inclusion of a MIDI thru hub, allowing several Volcas to be chained from a single MIDI or USB input. This would have driven the price up, but many would be happy to pay more for a slightly more pro-spec’d version which does more to integrate the Volcas into a wider setup.

In all then, the Volca Mix is - excuse the pun - a mixed bag. The built-in analogue effects can sound great, but only in the right context, and the send/return is handy but let down slightly by the lack of an input level. Power chaining is undeniably useful - and for some will be worth the price alone - but the sync function is a little pointless and the built-in speakers don’t really add anything.

In terms of look and rough-and-ready ethos, it certainly fits with the Volca range, but as a live or studio tool it’s debatable if there’s enough Volca-specific features here to make this a better option than similarly-priced compact mixers from the likes of Mackie, Allen & Heath or Soundcraft.

Korg’s Volca instruments are fantastic, and there’s a gap in the market for a device that handles all power, MIDI and audio needs for several of them all at once. Unfortunately, this isn’t quite it.