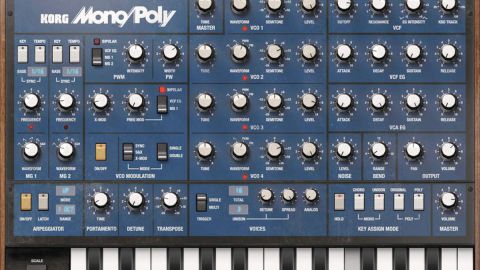 This is a neat and extremely playable synth from Korg, that convincingly maintains the flexibility and quirks of the original.

Korg has a long and well-respected background in the world of synthesis, and has straddled the worlds of analogue, digital and computer-based synthesis with much success over the years.

It is now in the enviable position of releasing cutting-edge kit, remakes of their legendary gear, and emulations of these, all at the same time.

Korg was quick off the mark in the virtual instrument stakes when they released their Legacy Collection back in 2004. On the analogue side, this included computer-based emulations of the MS-20 monosynth, Polysix, and the rather intriguing Mono/Poly.

In recent years it has been updating and porting these to run under iOS, both as separate apps, and as part of the Gadget production software. The latest of these to enter the Apple universe is iMono/Poly.

The Korg Mono/Poly was first produced in 1981 and was designed as a flexible monophonic synth to sit next to their PolySix polysynth.

However the Mono/Poly was no ordinary beast thanks to its interesting key assignment modes. As well as functioning as a straightforward four-oscillator monosynth, it could trigger chords (albeit rooted through single VCF and VCA stages), or move through the oscillators in turn with each new key press.

The synth utilised VCO and VCF sections built around classic SSM chip implementations, combined with two envelope generators and three LFOs. Cross modulation and oscillator sync were also supported, and a simple, but effective, arpeggiator (clocked from the second LFO), took care of simple sequencing. iMono/Poly has all of this (in virtual form) but adds a modulation matrix for more sophisticated sound design and two effects units for further finessing the raw sound.

As expected, and unlike the original, iMono/Poly allows you to store and recall patches. We tested iMono/Poly using both hardwired and networked MIDI and the gratification was instant. It certainly sounded very similar to my memories of the original. Perhaps even more importantly, given this synthesiser’s quirks, was the ease with which sounds could be tweaked or created from scratch.

Korg conveniently provides a series of clearly labelled template sounds as a means of quickly building your own. The software comes with a decent selection of factory sounds (with supplements via in-app purchases). As with all Korg synth apps, the iMono/Poly engine can be accessed from Gadget.

‘Montpellier’ provides access to the iMono/Poly sound set, though with a reduced scope for editing. For users of other iOS sequencers, Audiobus and Inter-App Audio integration is possible. Korg’s affordable new synth, like its forebear, delivers a different take on established conventions of monophonic synth design.