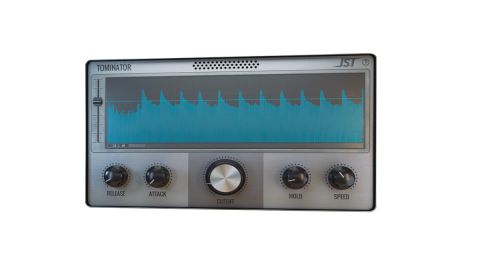 It’s no magic wand, but Tominator does a fair job for a good price.

Tominator is an effect plugin (VST/AU/AAX/ RTAS) dedicated to the suppression of cymbal bleed in close-miked drum channels, intended as a preferable alternative to the usual engineering tools of gating and expansion.

The input signal is visualised in the main display. Overlaid on the waveform, the adjustable Threshold line sets the volume level at which filtering of the signal starts (when fallen below) and stops (when exceeded). The ‘resting’ frequency of the filter (20Hz to 20kHz) is established by the Cutoff knob.

At default settings, the filtering is abrupt and ‘hard’, but by manipulating the Attack, Release, Hold and Speed controls, a timing envelope can be defined, fitting the filtering around the snare, kick or tom hits being isolated. Slightly confusingly, Release sets the time it takes for the filter to engage when the signal drops below the Threshold, and Attack controls how long it takes to disengage above the Threshold. Speed affects the modulation rate of the filter, from instantaneous to an audible sweep. When configured correctly, the end result is very similar to gating/expansion, but smoother in terms of reduction onset and release.

If you approach Tominator with the expectation that it’ll magically erase all extraneous metalwork from your separate drum tracks, you’ll inevitably be disappointed - like expansion, it’s a blunt instrument that can only address the bleed in between the hits you want to keep, not that layered in with them.

But that being said, it’s fairly priced for what it does, and very easy to use. A graphical representation of the cutoff movement overlaid on the waveform might be useful, and the control resolution could be a little finer, but as a more task-orientated substitute for gating, or an affordable alternative to a whole dynamic EQ plugin, Tominator does a good job.