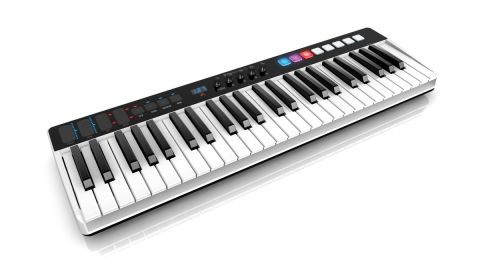 Described by IK Multimedia as its “all-in- one music production station”, the iRig Keys I/O combines a MIDI keyboard (49- and 25-key; we’re looking at the 49 here) and audio interface in a single unit, designed to be as compact as possible without compromising on playability.

First impressions of the iRig Keys I/O are fine. It’s not the prettiest keyboard we’ve ever seen, and it looks and feels quite plastic-y, but it acquits itself as sturdy enough. Hook-up to PC, Mac or iPad is done via IK’s archaic USB-or Lightning-to-mini-DIN cable (both are in the box), which we don’t like at all, as regular USB cables are much more easily replaced. What we do dig, though, is that the unit can be powered via USB or four AA batteries (oddly, only two are included), so you don’t have to invest in a separate power adaptor for use with your iPad. The included one-piece tablet stand is another very nice touch.

Despite packing 49 full-size synth action keys, the iRig Keys I/O 49 measures just 208mm deep and 693mm long (the £190 25-key model is 208x373mm). That is, indeed, about as small as a full-spec ’board is ever going to get, although for all the groovy promo shots of tat-covered hipsters skateboarding around with it tucked under their arm, it’s obviously not what you’d describe as ‘portable’ in the truest sense of the word. It won’t fit in your backpack like a mini key-equipped - but less playable - alternative.

The unweighted keys are light and responsive, with satisfying travel and minimal lateral movement. The whole bed does bend noticeably with even moderately heavy playing, but that doesn’t prove to be a problem beyond detracting somewhat from the hardware’s perceived solidity.

Complementing the keys are eight backlit, velocity-sensitive drum pads. These are very small but certainly up to the job of basic beat entry and MIDI button control.

The onboard audio interface operates at up to 24-bit/96kHz, and sounds good doing it. Latency bottoms out at 7.55ms round-trip at 32 samples, and sits at 17ms at a more practical 256 samples - standard stuff for any USB interface.

On the back panel, a combi input socket accepts an instrument-, line- or microphone-level signal, with 48V phantom power if required, and a Gain knob for volume adjustment. In the other direction, balanced quarter-inch outputs feed a mixer or monitors, and headphones are catered to by a minijack socket. Alongside, there’s the expected pedal input jack for MIDI expression/sustain control.

Rather than take up valuable space with regular pitch and mod wheels, IK has instead opted for a pair of short touchstrips. Likewise, the Octave shift, Program Change, and dual-purpose transport/editing buttons are touchpads. The transport buttons can be set to output MIDI Machine Control, CC and Real Time data.

Although we understand the design reasoning behind it, we’re not huge fans of all this touch-sensitivity, preferring the honest tactile response of real wheels and buttons. That is, of course, a matter of taste, though, and others will no doubt love the futuristic vibe.

The Data knob doubles as a menu navigation and selection rotary, and the Volume control for the audio interface, the latter switchable to any MIDI CC. The other four knobs shift between two banks (1-4 and 5-8), enabling delivery of up to eight MIDI CCs. They’re touch-sensitive, too, and separate MIDI CCs are assignable to touch input and rotation.

In terms of VFM, the iRig Keys I/O is a pretty good deal on its own, but IK has sweetened the pot big time by throwing in €750 worth of software.

The package kicks off with Live Lite and Studio One Prime - cut-down versions of Ableton and PreSonus’ acclaimed DAWs that give the newcomer to computer music everything they need to get started.

Much more exciting than those, however - and of more relevance to those who already have the DAW side of things covered - are IK’s own contributions. For starters, you get Miroslav Philharmonik 2 CE (€180), a 10GB orchestral ROMpler featuring over 700 instruments, edited, processed and mixed in an easy-to-use interface. Then there’s Syntronik Pro-V (€60), a sample-based emulation of the Sequential Circuits Prophet-5 and Prophet-10 synths.

The headlines, though, are T-RackS Deluxe and SampleTank 3 (€420). The first includes nine modules from IK’s superb mixing and mastering suite, and SampleTank 3 is a jaw-droppingly massive (33GB) ROMpler, packed with over 4000 multisampled acoustic, electric and electronic instruments of all kinds, endless effects, powerful pitchshifting and timestretching, and much more.

Editing is only moderately fiddly. The Data knob is used to step though menus, a range of numbered keys are pressed for data entry and cancellation, and a three-digit numeric LED provides the requisite visuals. Plenty of customisation is possible, including reassignment of the touchstrips to output MIDI CCs; setting individual pads to output MIDI notes, CCs or Program Change messages; adjustment of velocity sensitivity for pads and keys; and keyboard transposition. Up to 99 user presets can be stored alongside the four factory setups, giving live performers more than enough memory slots to cover their needs.

On the whole, the iRig Keys I/O is a great success, but there are a few areas where it falls short. Most notably, with only one mono input, it doesn’t exactly add up to a comprehensive recording solution - it should be enough for singer-songwriters and guitarists, but it’s never going to be a main audio interface for serious production purposes. Also, as mentioned, we’re not into the mini-DIN connector at all; and while we appreciate the need to substitute pitch and mod wheels with touchstrips as a space-saving measure, we still prefer the mechanical ‘real thing’ when it comes to performance.

In summary, the iRig Keys I/O 49 is an entry-level MIDI controller keyboard attached to a decent but channel-limited audio interface, and including a very tidy collection of software. It’s small enough to find a space on even the most hectic of studio desks, equipped to handle basic recording duties and general purpose MIDI control on stage and in the studio, and comparatively good value, particularly if the excellent bundled software appeals.