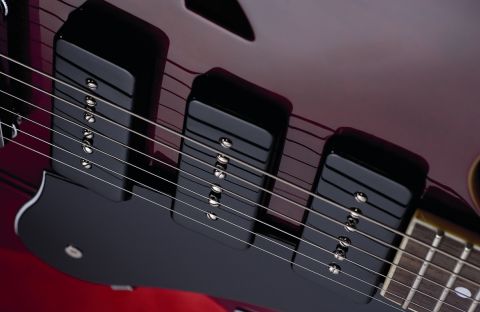 A tidily-made guitar - albeit a damn heavy one - that feels robust, sounds very good and has serious stage work written all over it.

The SA503 TVL is one of the most retro-looking, 'quirky' instruments that Yamaha has produced in some years. It's part of a full archtop range that includes Troy's favourite AES1500 (available with Bigsby or hardtail), the more jazz-intended AEX1500 and the long-standing SA2200.

Yamaha build electric guitars in numerous far eastern factories. They have their own facilities in Japan, Taiwan, China and Indonesia and when necessary use other OEM factories - much like any modern mass production. For the record the TVL hails from Indonesia - a location not typically known for mid-priced quality.

But the TVL does not feel, look or sound cheap in any way. It features classic semi construction: laminated maple front, back and sides with tasteful cream, rather than white, bound top and back edges.

An over-large centre block helps create a very solidbody-like sustain but also, unfortunately, contributes to a weight of 10lbs, heavy even for a solidbody. If you're used to modern solidbody single-cuts it'll be okay, but if your current squeeze is more lightweight then be warned.

The weight issue is a shame because every other aspect of the TVL is smart. The neck's full 'C' shape, nicely bound rosewood 'board with large highly polished frets and the set-up is near perfect.

It's one of the finest mid-priced semis in terms of playability that this reviewer has ever encountered. While the same-shape SA500 uses a mahogany neck, the TVL's is maple. "It was something I discussed with John Gaudesi at YGD in LA," explains Van Leeuwen. "He suggested it after I brought in a guitar that I used for this whole idea and that had a maple neck - that was a Gibson ES-225."

Van Leeuwen was insistent, too, on a Bigsby vibrato. Paired with Yamaha's own design tune-o-matic-style bridge, the Bigsby certainly lives up to Van Leeuwen's expectation. And although the Grover tuners feel a little slack, the overall tuning stability after a few vibrato waggles is fine.

The grooves in those small bridge saddles have been smoothed and polished, removing a notorious friction point for most Bigsby/tune-o-matic combinations. Aside from the visual impact of a Bigsby, it's the trio of soapbar P-90-style single-coils that give the TVL such attitude.

You'll also notice the pair of three-way toggle switches - the All Access System - mounted on a plastic plate on the guitar's treble horn.

While it is a heavy guitar, the balance and strapped on feel is excellent and from the off the rich, smooth acoustic resonance translates to a classy sound that's never thin - even on the bridge pickup - while retaining a good wiry P-90 character.

Yes, the two toggles take a little getting used too but not as much as not having a master volume. Three volumes on one guitar is a little excessive, especially with those switches. We didn't ask the question, but we'd be surprised if Troy didn't use a volume pedal.

Combining the middle pickup with either the neck or bridge produces a slightly honky mix that sounds edgy with a little crunch; the neck pickup is fluid with a little edge to it and tuneful feedback is always on tap. Even with higher gain/volume the TVL retains this big-but-edgy character.

Yes, the pickups hum and the bridge pickup could do with a little more power but this guitar clearly isn't about studio precision - it's about character, and it has that in abundance!